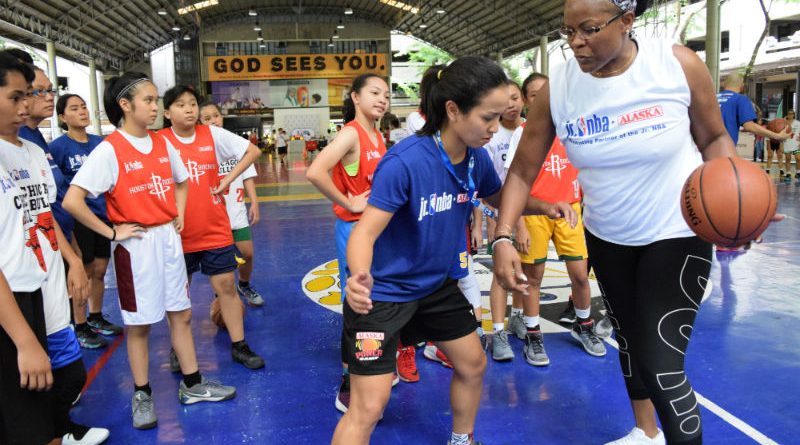 Christine Nichole Venterez, studying at said school, became one of the 16 new All-Stars to emerge from the Jr. NBA Philippines 2018 national camp after the five-month and four Regional Selection Camps in Baguio, Bacolod, Butuan and Manila officially concluded last Sunday, May 20, 2018.

The Eight boys and eight girls new All-Stars are the eleventh batch of Jr. NBA All-Stars and will join the growing list of Jr. NBA Alumni who will be making a name for themselves in their respective professional, collegiate and high school leagues.

Venterez will represent Northern Luzon in the NBA Experience Trip later this year in China.

A total of 74 participants attended the Jr. NBA Philippines 2018 presented by Alaska National Training Camp.  Headlined by Sacramento Kings center Willie Cauley-Stein and WNBA Hall of Famer Sheryl Swoopes, the National Training Camp was held at the Gatorade Hoops Center on May 18, at Don Bosco Technical Institute on May 19 and SM Mall of Asia Music Hall on May 20.

The Jr. NBA alumni were in attendance throughout the camp with Thirdy Ravena and Ricci Rivero visiting the Gatorade Hoops Center and Kai Sotto and Rhayyan Amsali highlighting the participants of the Jr. NBA Alumni All-Star Game in SM Mall of Asia.

Local coach Hazel Yambot was also named Coach of the Year and will join the All-Stars in their NBA Experience Trip in Shanghai.

The Jr. NBA All-Stars showcased skills on the court and exemplified the Jr. NBA core S.T.A.R. Values of Sportsmanship, Teamwork, a positive Attitude, and Respect.

Yambot and Mark “Tata” Belangel of Bacolod were chosen as the Coaches of the Year.  In addition, special awards were handed out to Kayla Marie Mataga and Javier Louis Jugo as Gatorade Hustle awardees, Merylle Cuasay and Czarlo Salvador as Panasonic Rising Stars, and Aishe Solis and Kim Aaron Tamayo, Cloudfone Awesome Players of the Game.

“The Jr. NBA program gives us the opportunity to contribute to our goal of getting more kids to play the game of basketball and help them understand how working hard on their craft can open doors and unlock greater opportunities in life,” said Hall of Famer Sheryl Swoopes.

“I came here to inspire you but your passion and eagerness to learn inspire me and I’m so grateful for that,” shared Sacramento Kings center Willie Cauley-Stein to the campers.

An NBA experience trip in Shanghai, China awaits the All-Stars in October where they will be joined by other Jr. NBA All-Stars from Indonesia, Malaysia, Singapore, Thailand and Vietnam in training and friendly competitions as they catch the NBA China Games 2018 featuring the Philadelphia 76ers and the Dallas Mavericks.