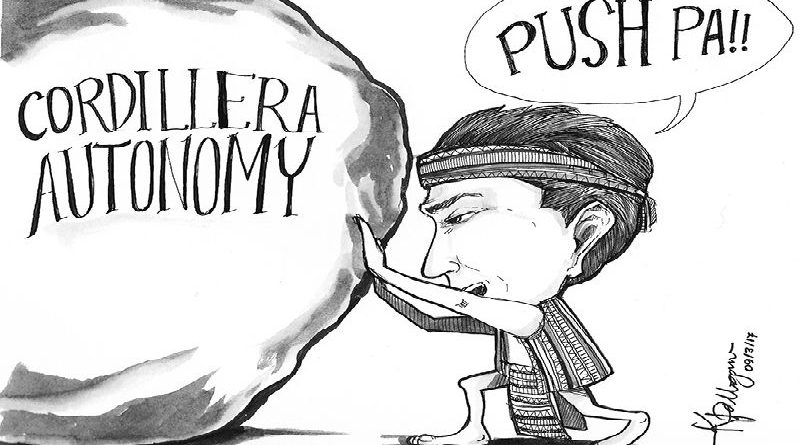 September 13, 1986, was the historic day when the ‘spat’ or peace pact was signed between former President Corazon C. Aquino, representing the Philippine government, and the late Fr. Conrado Balweg of the Cordillera Bodong Administration–Cordillera Peoples Liberation Army (CBA-CPLA) to put an end to the armed struggle of this group. The development aggression as experienced by the Cordillerans with the Cellophil Resources Corporation that would have led to the ravaging of some 200,000 hectares of forested areas and the Chico river dams that would displace thousands of indigenous peoples from their ancestral domain were a call to arms. Balweg split with the New Peoples Army to set up his own CPLA.

The Mt. Data peace signed at the Mount Data hotel in Bauko, Mountain Province allowed the members of the CPLA to lay down their arms in favor of the government’s commitment to grant the region an autonomous status, a primary demand of the CBA-CPLA in their 26-point agenda they presented to government negotiators.

Parallel to this were civil society efforts at lobbying for the inclusion of a provision in the 1987 Constitution for the establishment of autonomous regions in Muslim Mindanao and the Cordillera as a means of partially addressing the government’s neglect of the region and redress historical injustices including its treatment of the indigenous peoples territories as simply resources base.

Then President Aquino’s revolutionary power to exercise both executive and legislative powers to establish such an autonomous region was overtaken by historical events. The Constitution was adopted and ratified before the president could take such action and it mandated the enactment of an enabling autonomy law which must be ratified by the people. Aquino convinced the CBA-CPLA and other autonomy advocates that her administration was committed to fulfiling its obligation under the ‘sipat.’ Initially, this was fulfiled through the establishment of the Cordillera Administrative Region (CAR) under Executive Order No. 220 of July 15, 1987. Under the said executive issuance, the regional line agencies of the different government departments were established in the region aside from the operationalization of three Cordillera bodies, the Cordillera Executive Board (CEB), the Cordillera Regional Assembly (CRA) and the Cordillera Bodong Administration. These were supposed to administer the affairs of government in the region, accelerate the socio-economic development in the region and prepare the region for autonomy. The Cordillera Regional Consultative Commission (CRCC) was also created to consult the people on the supposed contents of the autonomy bill to be presented to Congress for enactment pursuant to the constitutional provision and for the approved law to be brought to the people for ratification.

Republic Act (RA) 6766 or the First Organic Act of the Cordillera was subjected to a plebiscite on January 30, 1990, but it was overwhelmingly rejected by the people primarily because the supposed contents of the law as proposed by the CRCC was watered down by Congress.  Even autonomy advocates campaigned against its ratification. CAR had its second crack for autonomy on March 7, 1998, when RA 8438 was again submitted to the people for ratification but was again overwhelmingly rejected. One factor that led to this is the lack of material time to cascade to the Cordillerans the important features of the autonomy law signed into law by former President Fidel V. Ramos on December 31, 1997, in Baguio City. Autonomy advocates had only less than two months to inform and educate the people and this same period coincided with the campaign for the presidential elections. For the second time, there was outright rejection although it already significant changes from the first law.

Let us give importance to our region’s history and for all those who were instrumental in efforts to gain autonomous status. As a step, we have the CAR as a temporary arrangement. We must understand that those who struggled for the recognition of a region that we can call our own thought of the welfare of the generations of Cordillerans to come. Now, we will be in a situation where the present generation of Cordillerans will be part of the region’s history as we take a third and final crack to the coveted autonomy.

We should remember that a worst-case scenario is for our region to be segmented if we do not have the autonomous status when federalism is enshrined in the Constitution. There is enough experience to tell us that a subdivided Cordillera is disadvantageous when we are included in regions where we lumped with provinces with bigger voting populations. A regional autonomous government in the Cordillera can give us the opportunity for self-governance. The Mount Data sipat may have given visibility to our struggle but it is the people on the ground who continue asserting our right to self-governance as a region. We must always remind ourselves that our leaders are accountable to us. Our vigilance must continue to ensure that our vision of an autonomous region is what we get. The first steps have been taken, we must continue to see this through – the Autonomous Region of the Cordillera.