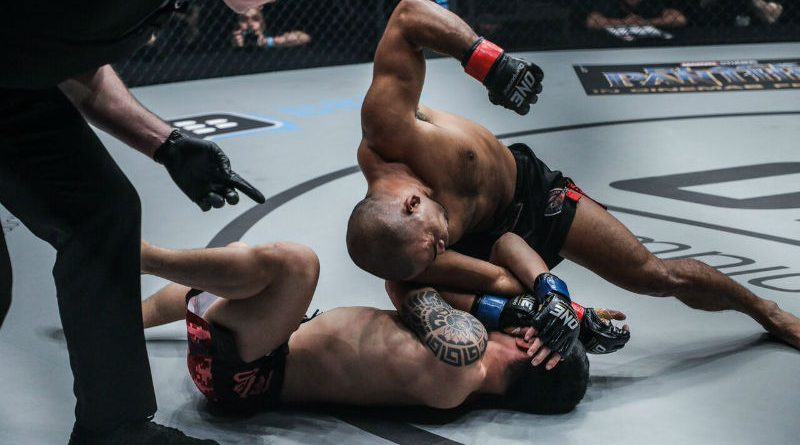 Rene “The Challenger” Catalan stopped Peng Xue Wen in their opening main card bout during the Kings Of Courage at the Jakarta Convention Center in Indonesia on Saturday, January 20, to keep his winning streak alive..

“The Challenger” has now registered four straight victories under his belt. He leaned on his elite wushu skills to stop the 21-year-old Chinese star at the 4:22 mark of the second round.

Catalan burst out in a southpaw stance to start the first round. He got control of the cage by throwing big hooks and a head kick that barely missed their marks. Catalan served notice of his striking power as he connected an array of strikes, including an uppercut and leg kick.

Catalan picked up where he left off when the bout resumed in the second round. Catalan shifted his attack to an orthodox stance and delivered more leg kicks.

Action got to the mat midway through the second and Peng got in a triangle choke in an attempt to end the bout although Catalan managed to wiggle free from the hold.

Both fighters got back on their feet and Catalan got back to work. He connected a shot to the liver that set up a flurry of punches, forcing Peng to back-pedal.

Another strike dropped Peng to the mat. Catalan followed and rain a salvo of ground and pound to force the referee to halt the contest and declare Catalan the winner by TKO, a first in his career.

The victory improves Catalan’s record to 4-2, with one no contest.

Peng, a 2014 National Youth Grecco Champion in China, came into the bout with much fanfare after his spectacular suplex knockout victory in his ONE debut back in November but could not find answers for Catalan’s attack.

Catalan effectively shut down the Chinese grappler’s wrestling game, dominated the striking exchanges, and surprised him by winning the majority of the scrambles.

In the main event of the evening, “The Panda” Xiong Jing Nan etched her name in the pages of history as the first ever ONE Women’s Strawweight World Champion, defeating Singaporean martial arts ace Tiffany Teo by referee stoppage in the fourth round in a riveting striking battle between two outstanding female martial artists.

Relying on her accurate striking, Xiong tagged Teo repeatedly with her patented overhand rights and stinging left hooks that presented a difficult problem to solve for the tough Singaporean.

Through sheer power and determination, Xiong overwhelmed her opponent and secured the finish by dropping Teo with a volley of crisp punches, prompting the referee to call a halt to the contest at 2:17 minutes of the fourth round.

Other results of ONE Kings Of Courage bouts:

(3) Bantamweight bout: Sunoto defeats Rin Saroth by Submission (Americana) at 2:07 minutes of Round 2;