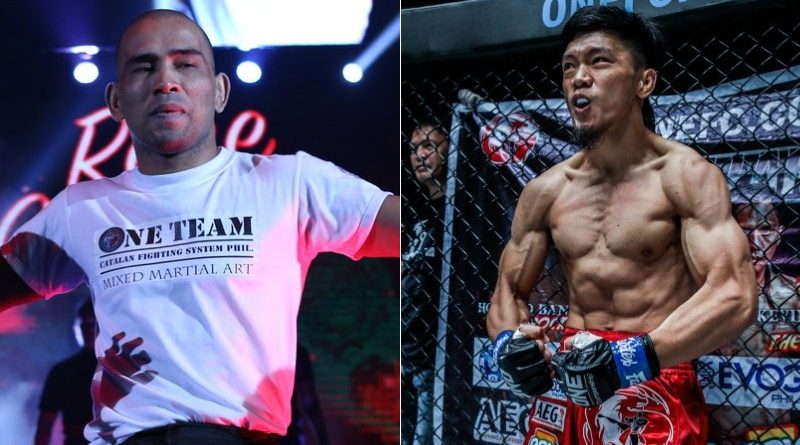 Rene Catalan and Lito Adiwang are obviously motivated to move up in the rankings. It showed in their latest pronouncement to ONE Championship.

Catalan was clear that he knows he is already older but is still gunning for his dream to win a world title. The 41-year old mixed martial artist said he was willing to face anyone but prefers to avoid fellow Filipinos.

That statement will eliminate a rematch between the third ranked contender and Joshua “The Passion” Pacio, who snapped his six-bout win streak during his latest attempt to claim the belt last November or Lito Adiwang, the fast rising star in the division.

That leaves three other men directly standing on his path to prove himself worthy of another crack at the gold: top ranked strawweight contender Yosuke “The Ninja” Saruta, 2nd ranked Yoshitaka “Nobita” Naito, and 4th ranked Alex “Little Rock” Silva.

According to ONE, a match against Saruta, the former ONE Strawweight World Champion, would certainly be interesting.

The Japanese star is the only non-Filipino ranked contender Catalan has not faced yet.

“Saruta is a very good athlete. He is really strong,” Catalan was quoted saying to ONE.

He believes Saruta would have defeated Pacio and retained his title in April of 2019 had he not made a mistake during their bout.

Catalan have mixed records against the two remaining contenders.

He made his professional debut actually came against “Little Rock” seven years ago where Silva made quick work of Catalan, winning via armbar in the first round.

On the other hand, he became the first man to finish Naito on March 2019.

“If I face Silva again, I have to really focus on ground defense,” Catalan says. “It’s all about good preparation when facing someone as dangerous as him.”

On Naito, he believes “Nobita” would be very eager to even the score if they ever face again. He is aware the Japanese can adjust as he did against Silva and could polish his striking.

“ [Naito] may play with me a bit on the feet before trying to impose his will on the ground”, he said.

When asked which of the fellow contenders he expects to face next, Catalan avoided calling anyone out, but he does believe it would be logical to face Naito.

He, however, is open to the possibility that Saruta could be next for Pacio being the top contender and a rematch between him and Naito could be up being next in the ladder.

Catalan’s hesitance for a Naito rematch is good news for Filipinos, if they are to avoid seeing two compatriots fight for the crown.

Adiwang was also clear in his previous statements that he would definitely avoid a clash with Pacio, preferring to move in a different division instead if his Team Lakay teammate is still not dethroned by the time his turn to challenge for the title comes.

While he was silent regarding a matchup with Catalan, Adiwang was vocal about who he wants next.

“I want to test my ground game against an elite grappler, and that guy is Naito,” Adiwang says to ONE. “He’s an excellent grappler, and you know he will try to force you to play his game on the ground. That’s why it’s a perfect test for me.”

ONE noted that facing Yoshitaka “Nobita” Naito would indeed make perfect sense for Adiwang on a skill set perspective.

It is because the “Achilles Heel thing” for this MMA camp always haunts them whenever they get to pummel their opponents with strikes or they gets defeated by submission.

While Team Lakay is one of the most respected mixed martial arts gyms in Asia, many still question whether fighter in this stable are capable of competing on the mat against the top grapplers in the world.

“I want to prove to everyone that we in Team Lakay are not just strikers and that we continuously work on our ground game,” Adiwang explains.

Gina Iniong, Joshua Pacio and Danny Kingad had previously exhibited traces of these improvements early this year before the COVID-19 induced lockdowns hit the globe.

“I want the fans to appreciate the hard work that we’re putting in each day to improve our skills on the ground. I won my last two fights via submission, but there are still a lot of negative comments saying that I only won on the ground because I took on strikers.”

It on this premise that Adiwang is willing to play Naito’s game and expects victory if they do meet.

“I am confident with the hard work that I put in,” the Team Lakar rising star adds. “And I am confident I have what it takes to submit a submission artist.”

He also feels he’s got the upper hand in this match up because of his strong mind but is lagging behind in the experience department.

“[Naito] has fought many times already in the Circle and he knows how to win”, he said.

Adiwang, however, acknowledged that all his fellow ranked contenders are good challenges and he has to prove himself being at the bottom of the rankings.

The “Thunder Kid” wowed ONE audiences by coming up with two thrilling first-round victories over Senzo Ikeda and Pongsiri “The Smiling Assassin” Mitsatit which made him the current 5th ranked contender the rankings.