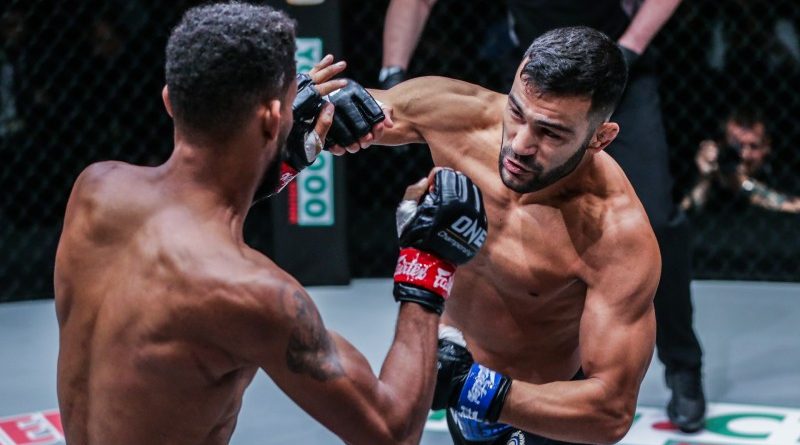 Australia’s Antonio “The Spartan” Caruso is no doubt stepping into the biggest bout of his career.

Caruso meets former ONE Lightweight World Champion Eduard “Landslide” Folayang of the Philippines next, when the two help kickstart the fireworks at ONE: INSIDE THE MATRIX, which broadcasts live from the Singapore Indoor Stadium in Singapore this Friday, 30 October.

The rising star from Adelaide in South Australia believes Folayang is ripe for the taking, and is planning a statement-making performance to boost him through the lightweight ranks.

“Folayang is explosive, but no offense, he’s 36 years old now. We all know that saying that time doesn’t do us justice. I’m a young and hungry man, so come October 30, I’m going to be all over him. My explosion, I’m going to take it out on him, and you’re going to see that Friday night,” said Caruso.

Caruso, 7-1, is a well-rounded fighter most adept on the ground. Folayang, on the other hand, is one of the most explosive strikers in Asian mixed martial arts. It’s a good contrast of styles that should provide fans an exciting back-and-forth affair.

“The Spartan” is confident ahead of the bout, and says fans should expect a quick finish, if the opportunity presents itself.

One man in Caruso’s corner, his Sanford MMA teammate Martin Nguyen, also the reigning ONE Featherweight World Champion, has already beaten Folayang before when they fought back in 2017. Nguyen put Folayang to sleep care of a counter overhand right that landed right on the button.

Nguyen has no doubt shared information on how to beat Folayang with Caruso, and the Australian says working with “The Situ-Asian” has been invaluable for his career.

“To have the extensive information that I’ve already got on Eduard is massive. Obviously, he’s already a very experienced fighter. There’s a lot of footage on him, of how he’s fought. And then to have a guy like Martin who has fought him and beat him is massive. To be a part of Sanford MMA, I believe is one of the best things in the world,” said Caruso.

“His striking ability, his ability to be explosive and come forward, his spinning attacks. He’s got excellent leg kicks. There are a lot of good things about Eduard. But at the same time, there are a lot of holes also that have been exposed many times before. These are the holes that me and my team have noticed, and we’re going to expose again.”

As an underdog, Caruso is heading into his much-anticipated showdown with Folayang looking to score a major upset over a fan-favorite. “The Spartan” feels there is no pressure on him to win, and that all eyes will be on Folayang.

If he can beat Folayang decisively, Caruso believes it will do wonders for his career. He’s excited for the possibilities, and can’t wait to step inside the Circle with one of the Philippines’ all-time greats.

“There’s no man out there on the planet that has the heart like me. I respect Eduard, because he has massive heart that he’s shown in his whole career. But this is a whole new era, and I’m coming in to take everything he’s got. I want to become a legend just like him. I want to be spoken about as a legend just like he has. Coming October 30, I want everything he has and more and I can’t wait. I can’t wait to take it,” Caruso ended.