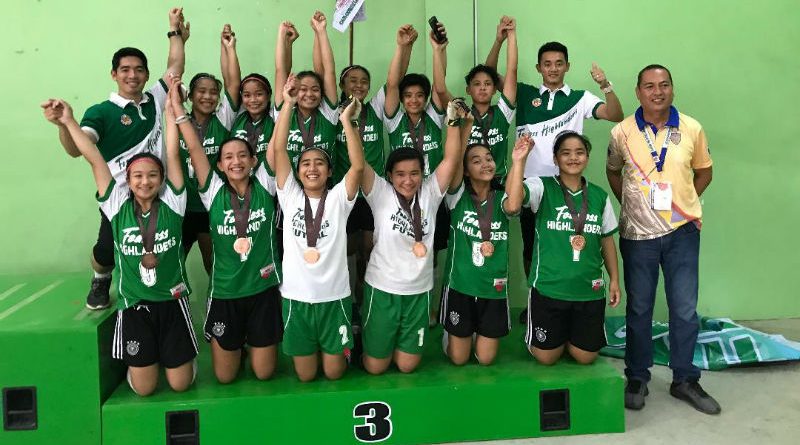 The Cordillera (CAR) Fearless Highlanders Futsal girls lived up to their moniker as they took down the defending champions in the quarterfinals and survived a tightly contested battle-for-third en-route to a historic bronze medal haul in the 2019 Palarong Pambansa Futsal Secondary Girls held at the Brgy. Mintal Gym, Davao City last April 29 to May 3.

CAR drew first blood in the closing minutes of the first half in the third place showdown, only to be erased by an own goal in the dying seconds which ended the game tied at 1-all. The gritty squad, however, kept their composure in the penalty shootout to seal the victory, 3-2, (4-3 aggregate) and cemented CAR’s best finish in the event since it was introduced in Palaro back in 2013.

Earlier, CAR scored a major upset in the quarterfinals against Central Visayas, last year’s champion and top finisher in Group A, via a 4-3 penalty shootout (6-5 aggregate).

CAR yielded to MIMAROPA in the semifinals round but not after giving up a good fight, 2-3. MIMAROPA marched on to claim the gold against Western Visayas in the finals.

The Fearless Highlanders started their campaign with convincing wins against Bicol Region (6-3) and CARAGA Region (7-1) in the eliminations round. CAR settled for draw against Zamboanga Peninsula Region (2-2) and Ilocos Region (3-3) which secured their second place in Group D and a ticket to the quarterfinals.

CAR’s third place feat in futsal is one notch higher than the region’s performance last year.

CAR tallied a total of 14-13-24 gold-silver-bronze medal good for 10th place in the over-all ranking.