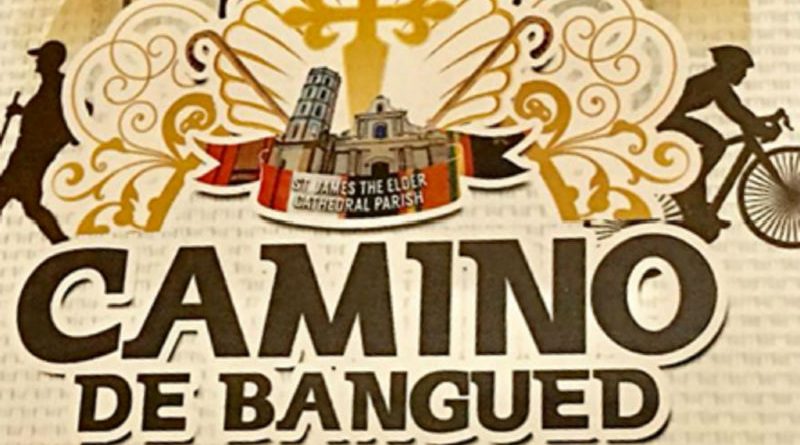 BANGUED, Abra –  Bangued Parish – Numerous elderly faithful of the Catholic Church and youngsters from all walks of life merged in a 30.7km length route of the First Camino De Bangued which was recently launched to propel the prelude feast of the parish’s patron saint, St. James the Elder, led by the Parish Priest and Bishop of the Diocese of Bangued, Most Rev. Leopoldo C. Jaucian, SVD DD, accompanied by Msgr. Nilo S. Peig, JCD, Vicar General and the two (2) parochial vicars of St. James the Elder Cathedral Parish Bangued, Abra.

From the two hundred twenty (220) registrants, seventy percent (70%) of whom were old folks, alighted and joined the two-day “Walk with Senor Santiago”  following religiously the stretch of Camino De Bangued on June 11 & 12, 2018.

The Camino De Bangued started at 5:00 o’clock dawn with an opening prayer called for by Bishop Leopoldo C. Jaucian, SVD DD, and his parochial vicar Fr. Samuel Baruela at the foot of the statue of Our Lady of Mount Carmel, SODEC, Galicia, Pidigan, Abra.

Before the long journey commenced, the Bishop advised the participants to be in groups or by buddies.  On their way, some fervently prayed the rosary while many others, after imploring the aide of the Divine Providence in their personal wishes, keenly observed the beauty of nature.

The designated route introduced by the Parish Pastoral Council were planned in such a way that participants will experience what our farmers are trailing in thickly timbered mountains of Baddec and Sitio Catarataraan, likewise in the light-forest foothills of Sitio Pugaro, Palao all in the town of Bangued.

There are no roads connecting Sitio Pugaro to Barangay Malita.  Pilgrims have to go to narrow and straight path in the fields and to the deeply entrenched way of swamp-type domestic water buffalo/carabao with cart going to the farms. These are uncommon places where one can get in touch with nature in the highly urbanized capital town of Abra.

All roads connecting to the remaining 9 stations or simbag-gimong are located in the lowland areas are flat surface concreted roads in: Barangays Malita, Agtangao, Lubong, Cosili East and Cosili West.  The last barangay that purportedly would be the sleep-over of “Caminoers” would go for the second day.

Few senior citizens stayed overnight since almost everyone finished the Camino in one whole day.

No one escape the rugged and stony path along Consolado, Lingtan to the Banez subdivision in Nagtong-o, Calaba, Bangued.  Going out from that line was the crossing of Abra-Ilocos Norte National Highway to Calaba North and Calaba South where the Chapel of St. Michael the Archangel is situated.  All passed the crisscross-coastal roads in Barangay Cabuloan and some parts of Barangay Sta. Rosa, the last chapel to stop and pray.  These make a total count of 11kms including portions of Mckinley Street and Taft Street.

Every station, you find community petitions and prayers.  Everybody knelt on the front pews, prayed passionately and rested in a 10-minute break.

Potable water was distributed free to those in need.  Locally cooked delicacies and fruits were exhibited but for sale.  Barrio products such as avocado, santol, coconut nuts, muscovado, basi, suka, maize, lubilubi, binuelos, palitaw and nilupat were also found at the table of attendants and waitrons.

Several were hard-up locating their way due to unnoticeable Camino signs, or signs were blown by the strong tail end winds of Tropical Storm Domeng intensified by the south-west monsoon rain.

After 4 hours of walk-in regular phasing, the youngsters touched the end of the first day discreetly.  Since these robust and hearty participants found waiting for the arrival of the leisurely hiking individuals and groups unpleasant, they continued walking among others and finished the whole way arriving at the end-cathedral at 3:30 in the afternoon of June 11, 2018.  There were those who arrived at the house of St. James the Elder at 7:00PM and the latest came at 8:30PM of the same day.

More bonded in the Camino De Bangued for the second day, June 12, 2018, at the starting point, Cosili West, Bangued.  Rejoinders from other places came in and after validation, they started walking west at 5 o’clock in the morning.  Late comers followed after singing-up at the chapel.  Old folks who stayed overnight in Nazareth Homes prepared by officers and members of Barrio Pastoral Council and Simbag leaders woke-up late and jump-started at 6:00AM.

Concelebrated mass was offered at 5:00PM to culminate the two-day journey of prayers, mainly celebrated by His Excellency Leopoldo C. Jaucian, SVD DD.   Fr. Samuel Baruela and Fr. Elmar Cabunoc concelebrated the said mass in the Cathedral to give praise for everyone’s success.  Certificates of participation were distributed to those who finished the course.

Although, Camino De Bangued is not actually seasonal, many are looking forward for the next to come. By SERAFIN B. ALZATE

This post has already been read 188 times!Firstly, great emphasis is given that the contents of this series are intended

August 5, 2020 Aileen P. Refuerzo Comments Off on Treat yourself and everyone like they have COVID – health officials
This site uses cookies: Find out more.