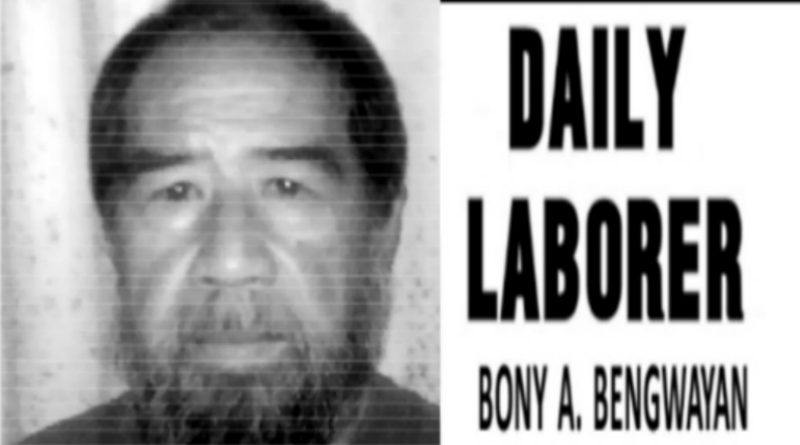 Often, there are days on end when many, if not all of us, sport the long face, (glumness written on our faces) besieged by being alone and feeling alone, our shadows our only companions.

Even our own  shadows, fearful of being mired in our glumness, would like to   jump ship by wanting to detach themselves, abandon  and run away  from us  as far as possible, not wanting to be part of our gloom.

However, being alone or all by our lonesome and enjoying it to the fullest is, whatchamacallit? Aah, it’s peaceful solitude; the sweet absence of gloomy looks that even our pesky shadows approves of and dances gleefully even as we are still.

Being by  their  lonesome   occurs usually to thousands of  Daily Laborers in Cordillera Administrative Region (CAR) and Region 1 who, while in  pursuit   of honest sweat, find time  to reflect that  life is not about how you survive the  storm  but  it’s how about you  dance in the rain,  because when the going  gets tough, the tough gets  going.

As it usually happens to a good friend, Andrew Weygan, from Besao, Mountain Province, who often waxes poetic about the cheery possibilities of being by one’s lonesome.

Once, Andrew shared his thoughts on being by one’s lonesome to Ah: “The best thoughts were the ones that got away. When a vague thought or embryonic idea surfaces, it’s a good thought to tuck these away and forgotten while we take a walk, in order that our ideas and memories can be born again and seen in new contexts and fresh perspectives.”

There we are. What Andrew is merely injecting is, lonely you never will be if you learn to befriend yourself. Laugh and the world laughs with you; snore and you snore alone.

Take the case of Ah. One day he slumped into depressing loneliness he entertained this fantastic idea that should his time is up, his body be donated   for research, more specifically to a lonely scientist whose lonely dream is bringing back lonely dead bodies to life.

Or the day he became lonely and feeling alone he became a slobbering drunk. During bouts of stupor, he kept bawling, “I’m so lonely I could cry since tomorrow never comes.”  Then he’d drift off to sleep, mouth open while flies happily feasted on his smelly mouth.

Barangay officials who shudder listening at his lousy singing and couldn’t keep him quiet hauled him before the office of our good mayor, Mauricio Domogan.

As Andrew says, being by your lonesome shows how to grow old gracefully. As others say,   the older the ukulele or guitar is, sweeter are their music.

Being by our lonesome multiplies beauty to life, making the day or night air better for the sun to ignite special burns to sunsets as we pine for the good ‘ol days of trading our tomorrows for a single yesterday.

As what Baguio mayor Mauricio Domogan, La Trinidad, Benguet mayor Romeo Salda,  Atty. Joe Molintas,  city councilors Faustino Olowan, Peter Fianza  and other  countless  CAR and Region 1  Daily Laborers indisputably  note, “ How could  we ever feel lonely when by our lonesome  we  know and remember we have  amazing family members, next-of-kin and  friends, many of them crazy as hell but gentle as lambs?”

Next to impossible to entertain loneliness  when one may as well sit back  and wonder how such amazing people wouldn’t pull a punch to whip up a joke  or  play  prank on  anybody   feeling  soooo lonely,  that lonely guy is forced to crack a smile and as a result, die laughing mad.

These amazing people, when they go to the confessional, confess to their priests, “Forgive me Father for I have sinned. I was the one responsible for forcing a friend to smile and as a result, that friend had forgotten to breath.”

Oy! It takes a grin to brush the blues away, indeed. And by our lonesome, we find a hint of hope in every howl of lonely desperation while the “anitos” (gods) roar their heads off in laughter, amused at our antics of being lonely or feeling alone for no reason.

This post has already been read 1404 times!Winners of the 2021 Productivity Olympics were announced during the First Ever Virtual