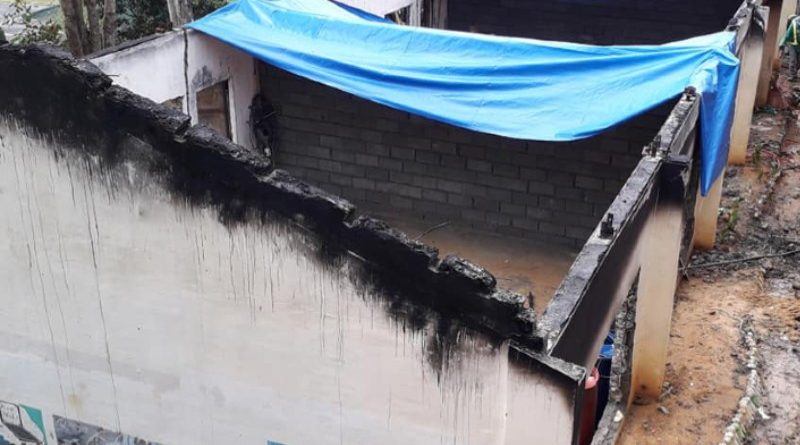 MANKAYAN, Benguet– Residents in the municipality continue to adhere to the time-honored ‘bayanihan spirit’ to help during difficult times and for the rebuilding of damaged structures because of natural and man-made calamities.

One of the products of the practice of the ‘bayanihan spirit’ is the restoration of the totally burned one-story 3-classroom building of the Lepanto National High School (LNHS) that was recently restored through the efforts of concerned stakeholders who jointly worked together to rebuild the damaged structure.

Mayor Frenzel A. Ayong disclosed that the funds used to procure the needed materials for the reconstruction of the burned building came from the municipal government’s allocation from the Social Development and Management Program (SDMP) of the Lepanto Consolidated Mining Company (LCMC) while the labor component was provided by the LCMC employees with the unwavering support of the school’s Parents-Teachers Association (PTA).

The restored schoolbuilding was recently inaugurated by municipal officials led by Mayor Ayong, school officials, LCMC officers, PTA representatives, and the community of which will be used in time for face-to-face classes when the situation in the country will normalize.

Ayong claimed that some 700,000 pesos was used for restoration materials for the burned schoolbuilding which came from the municipal government’s allocation from the company’s SDMP.

In August last year, the one-story 3-clasroom building of the LNHS was totally burned from a fire that caused allegedly by faulty electrical wiring that deprived some of the students the venue for their classes for the previous schoolyear.

The LNHS recently celebrated its 68th Founding Anniversary with simple but meaningful activities including the blessing and inauguration of the newly-restored schoolbuilding that is ready for use.

The municipal chief executive expressed his gratitude to the LCMC workers and the PTA representatives whose combined efforts to facilitate the immediate restoration of the burned structure for the benefit of the students to attend future face-to-face classes.

Earlier, residents in some barangays also displayed the ‘bayanihan spirit’ with the immediate clearing of landslides along certain barangay, municipal, provincial and national roads within the jurisdiction of the municipality that ensured the unimpeded flow of traffic for the continuous transport of the agricultural produce of the farmers from the farms to the nearest market.

Mayor Ayong commended the voluntarism of the people from the town’s 12 barangays for their readiness in extending the needed assistance to those who are in need of help during difficult times without waiting for something in return.

This post has already been read 17504 times!…if they played under 1998 rules and style. Sorry, Draymond Green. Yeah, you