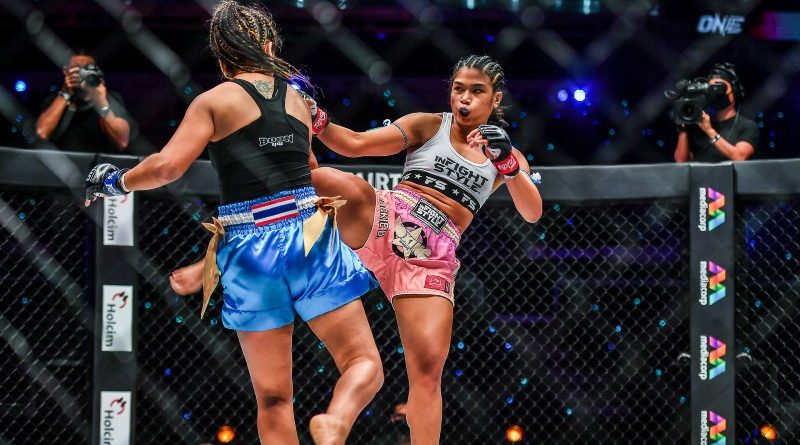 After a close call in her second ONE bout, Jackielou Buntan reminded her Filipino fans how explosive this countryman of theirs as she was back her dominating self in walloping Daniela Lopez during in ONE: Empower On September 3, 2021 at Singapore Indoor Stadium.

The America-born Filipino scored the unanimous decision win against the Argentinian by dictating the pace of the fight right from the opening round. Buntan unleashed kicks consistently that punished her rival’s leg and repeatedly pounded Lopez’s jaw with combinations throughout the fight.

She also should have made Cordillerans watching the bout ecstatic as she landed a spinning elbow, a favorite staple move of Team Lakay fighters, in the final seconds that highlighted her dominance.

Her impressive win put Filipino fight fans on high note early and cushioned the disappointment caused by a controversial loss of compatriot Denice Zamboanga, who crashed out of the One Women’s Atomweight Grand Prix.

Buntan had to be contented to operate off the back foot and select her spots as Lopez opened Round One with a forward march.

While Buntan outstruck her foe with flurries of punches and kicks, it was a thudding right cross-left hook combination that wobbled the Argentine which cemented Buntan’s dominance in the opening three minutes.

The 23-year old then rode her bicycle to beat Lopez to the punch and left her rival hitting air on the exit. Buntan added leg hits to the body and finished the frame with an impressive front kick to the Argentine’s face to further detail her being a well-rounded fighter as well as her control of this bout.

When a desperate Lopez tried to press forward again in the final stanza in desperate efforts to reverse the outcome, Buntan went fists again and connected fast, accurate counters shots.

A right cross-left hook combo that Lopez reeling back and the spinning elbow punctuated the glorious evening for Buntan.

The 24-year-old Southern California native improved her record to a 23-5 slate, 3-0 in ONE Championship fights.

She announced her entry to the promotion in February this year with an explosive performance by flooring highly regarded Thai rival Wonder Girl Fairtex in the First Round enroute to a convincing unanimous decision victory.

She was pinpoint tactically by choosing the right timing in picking the right spots to attack and fire the right shots in dominating the three-round fight.

Buntan clearly got Wonder Girl’s number and did not give her adversary any chance to recover from the knockdown. She kept the pressure on and ran circles around her while continuing to press her attacks for the rest of the fight, eventually resulting to a swollen left eye for the Thai.

She, however, found resistance in her second fight from Russian Ekaterina Vandaryeva who she outlasted to take a close majority decision victory on April, 2021.

Buntan got trouble setting her range in the first frame but got her rhythm in the last two rounds by utilizing boxing combined low kicks to keep Vandaryeva at bay.

Buntan letting all loose in the final frame swing the favor to her side. The Fil-Am pressed the action, slithered through Vandaryeva’s octopus-like limbs, and punished her foe with kicks and three-punch combinations to earn the two judges’ nod.

These consecutive wins may have set Buntan an opportunity to challenge for the ONE strawweight Muay Thai World title.

Meanwhile, the loss sends Lopez’s record down to 7-4.

5       5SharesThis post has already been read 4624 times!The city is looking for a private entity that is willing to partner