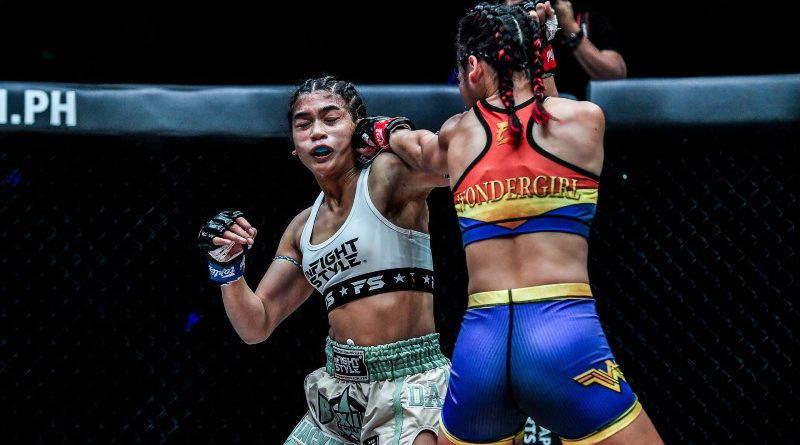 ONE Championship debutant Jackielou Buntan announced her entry to the promotion with an explosive performance as she floored rival Wonder Girl Fairtex in the first round before deciding not to be reckless and brilliantly finished strong for a unanimous decision victory.

Buntan displayed speed and quickness  to go along with her promised high fight IQ in subduing Nat Jaroonsak of Thailand in their strawweight Muay Thai bout during ONE: FISTS OF FURY at the Singapore Indoor Stadium in Singapore on Friday, 26 February 2021.

The 23-year-old Filipino-American Muay Thai fighter was tactically sound in choosing the right timing to pick the right spots and fire the right shots in dominated the three-round fight.

Buntan, a full-blooded Filipino who has dual citizenship because she was born in the US where her family migrated, was calculated all fight  long with her attacks.

Buntan came into the fight with a magnificent plan, leaning away from her rival’s high kicks and put on the role of a counter-puncher.

The plan was evidently working right form the opening bell with her combinations and kicks landing squarely at their targets while her rival’s kick would usually catch nothing but air as she ducks to avoid them.

The Thai star came in the aggressor, pressing forward and pushed the Boxing Works product back to the circle wall with straight punches, only to receive hard left hooks and left shins to the midsection when she got close.

Wonder Girl, who was coming in the fight hot with two consecutive knockout victories, could catch nothing but air as majority of her kicks could not find their target despite her height and reach advantage.

Buntan kept on repeatedly landing low kicks with hard strikes to the body in the first round until she connected two crushing left hooks squarely Wonder Girl’s chin, the first of which was seemingly shrugged off by the Thai rising star but the second sending her crashing to the canvass face first.

Wonder Girl quickly got up to beat the count and was eventually given a reprive from an onrushing Buntan when the bell sounded to end the round.

The California native seemingly pulled back in her quest for a knockdown victory but continued to surge ahead on the scorecards in the last two rounds, staying true to what had worked in the opening frame: dodging any incoming hits from Wonder Girl while stepping in with her cross-hook combination and low kicks now and then.

Buntan, who clearly got Wonder Girl’s number this night, did not give her adversary any chance to recover from the knockdown as she keep the pressure on and ran circles around her while continuing to press her attacks for the rest of the fight, eventually resulting to a swollen left eye for the 21-year old Thai.

The Fil-am star impressed ONE commentators, who compared her game to that of ONE Atomweight Kickboxing World Champion, Janet “JT” Todd., which was kind of expected, being her teammate and having trained with her majority of the time.

“I’m lost for words. I have a 100 percent confidence in my training, with my coaches” said the jubillant Buntan, who improved to 21-5 in her career.

With her spectacular debut against a fancied opponent, the  anticipated major player in the strawweight division is expected to become another exciting face for Filipinos in future bouts of the pure striking competitions like Muay Thai.

While there is an abundance of Filipino talent in ONE, majority of them are plying their trade in mixed martial arts division.