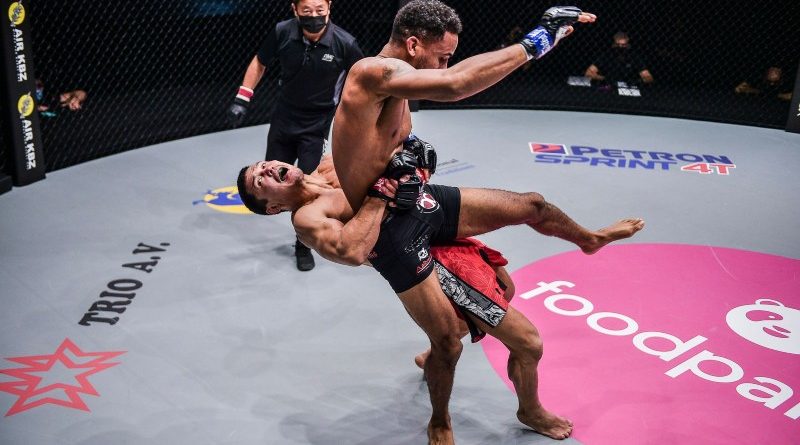 Eduard Folayang rival Peter Buist succumbed to a loss while ONE Welterweight World Champion Kiamrian Abbasov retained his title during ONE: INSIDE THE MATRIX II, a previously recorded event action-packed event at the Singapore Indoor Stadium and broadcasted globally on Friday, 6 November.

Nakashima connected with a massive punch that damaged Abbasov’s nose in the first round and forced the “Brazen” to overcome adversity the rest of the way.

In the second round, Nakashima began targeting the nose and attempted takedowns that were, however, defended well by Abbasov.

Nakashima finally landed a successful takedown after multiple tries in the third round and worked from top position. From there, Nakashima appeared to be in full control of the action and cruising to victory.

Abbasov had other plans as he turned tables in the fourth round when staggered Nakashima with a knee as the challenger was attempting another double-leg.

With Nakashima rocked, “Brazen” closed the show behind a flurry of strikes that forced the referee to halt the contest.

As predicted by Folayang, ranked lightweight contenders Timofey Nastyukhin of Russia and Pieter “The Archangel” Buist of The Netherlands competed in a back-and-forth contest in the co-main event that served as a ONE Lightweight World Title eliminator.

The hard-hitting Nastyukhin was aggressive early, uncorking a series of haymakers as Buist used his length to keep the distance.

In the second round, Nastyukhin complemented his impressive striking with a wrestling showcase, taking Buist down to the canvas with a couple of powerful slams.

Buist showed signs of life in the third, landing a number of power shots from range. However, time ran out for “The Archangel,” and the final bell rang to give Nastyukhin a hard-earned unanimous decision victory.

Folayang predicted this match between two good strikers will be an interesting one and it was. “You have one guy who is very technical and long in Buist, and then you have another guy who is very powerful and aggressive. Timofey is the more aggressive fighter, but Pieter knows how to use his advantages, specifically his height. It’s going to be an interesting match for sure, and as a fan, it will be fun to watch. If you like action-packed fights, this one should not disappoint.”, he said before the bout.

Geje Eustaquio also got his prediction right pertaining to a bout earlier in the evening that featured Japanese spitfire Yuya “Little Piranha” Wakamatsu adding yet another one-punch knockout to his highlight reel, stopping South Korea’s Kim Kyu Sung in the final minute of the opening round.

Being familiar with each man’s unique style, Eustaquio confidently had Wakamatsu beating Kim.

“The real winner of this fight will be the fans. This is a crowd-pleasing matchup. That being said, it’s a tough pick, but I have Yuya Wakamatsu winning this one by unanimous decision,” said Eustaquio.

Wakamatsu came out of the gates with fiery combinations, stalking Kim aggressively across the Circle. The South Korean athlete from Evolve MMA tried to use his reach advantage to stave off Wakamatsu’s attacks, but the Japanese stalwart was intent on ending the night early.

Towards the end of the round, Wakamatsu timed a well-placed right hand as his opponent was coming in, shutting off Kim’s lights before he hit the ground.

After the opening bell, Meng immediately backed Lumban Gaol up against the Circle Wall, looking to push the pace and set up the finish. Carefully gauging the distance, Meng parried a punch with her lead hand and then connected with a powerful right hand down the middle, ending the bout just past the one-minute mark.

ONE Championship returns to our screens with ONE: INSIDE THE MATRIX III, a previously recorded event for global broadcast on Friday, 13 November.

Official Results for ONE: INSIDE THE MATRIX II

ONE Welterweight World Championship: Kiamrian Abbasov defeats James Nakashima by TKO (Strikes) at 3:27 of Round 4

This post has already been read 17543 times!…if they played under 1998 rules and style. Sorry, Draymond Green. Yeah, you