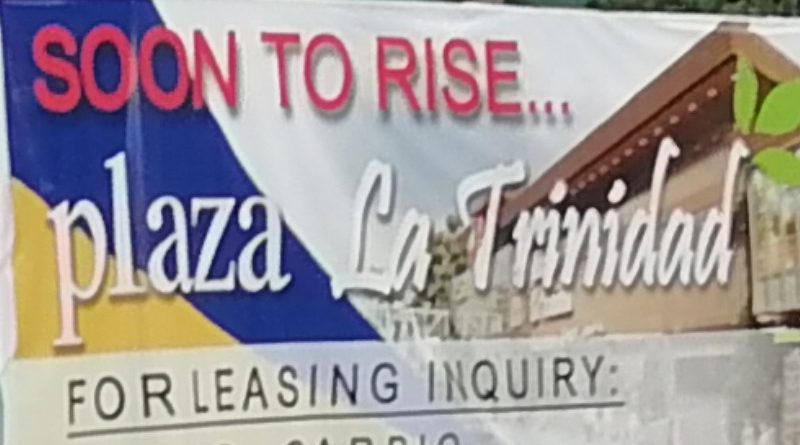 LA TRINIDAD, Benguet – Former Mayor Edna C. Tabanda underscored that the proposed construction of a 4-story mall within the donated property of the State-run Benguet State University (BSU) will eventually kill the micro, small and medium enterprises operating right in the heart of the valley.

The former town executive stated that it seems that the present administration is trying to allegedly rush the project which casts doubts on the real intention of the project when the developer has not yet officially applied for the permitting process among other zoning procedures enshrined in existing local ordinances.

She said that businesses currently operating in the public market and other private establishments near the area of the proposed mall will definitely be affected once the same will be operational because of the expected competition that will be provided by the lessees in the said structure that will result to the eventual death of the MSMEs that painstakingly worked hard and infused huge investments to ensure the sustainability of their existence to enhance economic activities in the valley.

Tabanda argued that BSU must instead maximize the use of its properties to pursue its mandate to provide quality education to the youth because there are still numerous education-related issues and concerns that should be effectively and efficiently addressed by the institution rather than lease its prime properties for other business ventures that will affect the delivery of quality education to the concerned stakeholders.

According to her, the government is providing the budget for the institution to be able to advance the delivery of quality education that is why there is no more need for BSU to look for private developers to provide the same as it just needs aggressive, dedicated and passionate leaders who will be able to make the appropriate representation with concerned government agencies to ensure the availability of the required funding for the continuous improvement of its facilities.

Aside from the negative impact of the proposed project to the town’s business sector, she emphasized that it seems that the agreement that was signed between the parties is grossly disadvantageous to the government, thus, the need for concerned government agencies that have oversight functi8ons over the university to take a second look on the details of the contract to prevent the institution from being shortchanged.

Tabanda rallied concerns sectors in the municipality to remain vigilant on alleged evident attempts by concerned stakeholders to rush the aforesaid project that will surely have a serious negative impact on the state of the environment, the prevailing traffic situation, solid waste management among other issues and concerns that have effects on the quality of life in the municipality.

Earlier, BSU officials entered into an agreement with Graceland Corporation to put up a 4-story mall within a 4,000-square meter property of the institution that had been reportedly donated by an influential clan in the municipality purposely for education needs of the present and future generations of the youth and for no other purpose. By HENT