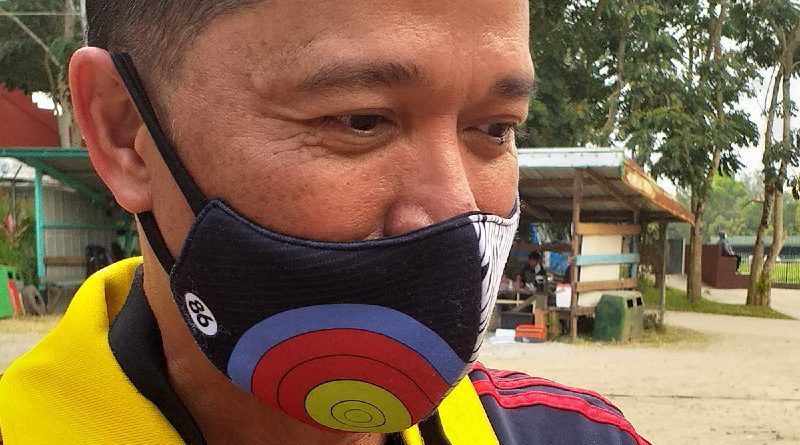 When he retired from military service last year after 34 years of service, this navyman took up the bow and arrow instead of clubs and dimpled ball like most of his batchmate from the Philippine Military Academy class of 1986.

“This (sport) is pretty exciting,” said retired Rear Admiral Samuel Felix while picking his arrows from the target. These targets are newly minted and his batchmates helped him assemble it which were later donated to the Pines Archery Club that will be used for the World Indoor Series last January 16.

Felix made the donation to the archery club where his son Daniel, a grade 12 from the University of the Cordilleras is a member.

But when he saw the archers tried the new target, the retired navyman became fascinated and tried his hands at shooting and found that it is to his liking.

Pines coach Andy Villamor, is proud of his new “ward”, who recently placed fourth in a national tournament and ahead of sportsman and former actor Richard Gomez. “He placed fourth, while Gomez (now Ormoc mayor), wound up sixth,” said Villamor, a teacher at the Pines City National High School who still sings during his spare time.

Felix actually went to his batchmates for some help in providing from the archery club not only targets, but also a 27 inch monitor that was used during the online world series.

“His efforts actually inspired the kids to shoot, puros bago na mga gamit namin (all of our equipment are now new), thanks to him [Felix]),” said Villamor.

“My mistahs from the PMA helped me out. And they are happy that it helped our young archers,” said Felix. His classmates include former Philippine National Police chiefs Ronald dela Rosa (now a senator), Oscar Albayalde, Archie Gamboa and Camilo Cascolan.

“Maybe in the future, our good senator (dela Rosa) could help improve our archery range,” he added.

Felix is eyeing a vacant lot at the Loakan/PMA area where “we used to have our wargames as cadets.”

“I have been doing some target shooting there until the owners, locals, brought me to the barangay office, where I had to ask for forgiveness,” said Felix.

Now the Mariano family, who owns the lot, are willing to have him develop it into an archery range,” he added with a smile.

Felix is eyeing to have a world class standard archery range in the area, again with help from his mistahs from the PMA.

Felix said that he will continue helping the young archers, high school and college, since he is still young and newly retired from military service.

“I don’t even imagine myself joining the service. I’ll just sit and kuyakoy na lang (sit cross legged), unlike my mistahs, many of them into government service and look what it got them,” he said.

“I’d rather sit comfortably, and then shoot once in a while. Then there are these kids that need support,” he added.

“We are very lucky to have him as a player and also as a big supporter with his PMA classmates,” said Villamor, who saw Felix compete in the world series in the compound category.

With Felix around, Villamor hopes to hone more athletes competing in the regional and national level, like his children and gain scholarship. His eldest, Abelardo, went to school for free thanks to archery. He is now a licensed mechanical engineer (megatronics) awaiting a call for employment but spends his time for the moment assisting his father train young archers. Pigeon Lobien

Photo: MISTAH SUPPORT. Retired Philippine Navy Rear Admiral Samuel Felix explains his plans for the Pines Archery Club including the fixing of the archery range at the Baguio athletic bowl and one that will rise at the Philippine Military Academy/Loakan area. Felix is hopeful that he can get support from his retired classmates from the PMA that include four former Philippine National Police chiefs – Sen. Ronald dela Rosa, Oscar Alabyalde, Archie Gamboa and Baguio boy Camilo Cascolan. Pigeon Lobien