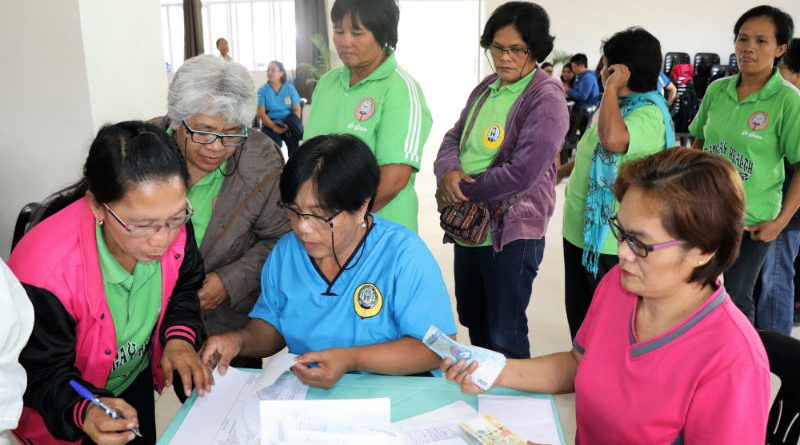 BONTOC, Mountain Province – Barangay Health Workers (BHWs) in this capital town received P7, 500 each as an honorarium for this year during the BHW Congress on December 13, 2018 at the Bontoc Municipal Capitol.

In his message, Bontoc Mayor Franklin Odsey thanked the BHWs who are the frontliners in providing quality health services in their respective barangays. He likewise assured the continuous support of the municipal government to the health sector adding that it is one of its priority programs.

“We recognize the hard work our health providers- our BHWs. Before, our BHWs started to receive P1, 500.00 each. However, it is fitting to increase their honorarium as an incentive for all their hard work. For this year, BHWs shall receive  an honorarium P7, 500 each. I also hope that we will continue to be strongly united to improve and implement more programs for a healthy Bontoc,” Odsey remarked in a separate interview.

Development Management Officer IV Claudio B. Pancho of the Department of Health (DOH) – Provincial Office similarly expressed his appreciation to the BHWs whom he considered as the “unsung heroes”.

According to Pancho, the BHWs are the partners of the government in the delivery of health services especially on maternal and child care. He added that the BHWs are the ones who are tapped to conduct survey on the status of the constituents in terms of health in their respective barangay, conduct home visit, assist in the immunization of children, and among others.  This, he said are more than enough to suffice how important BHWs are.

Similarly, Sangguniang Bayan members Julian Chumacog and Alsannyster Patingan thanked the BHWs for their enthusiasm in rendering genuine service to their respective barangays.

Also, Dr. Diga Kay Gomez, the Municipal Health Officer recognized the role of the BHWs in bringing health services closer to the constituents. She likewise extended her gratitude to the officials of Bontoc for always giving importance on the welfare of the public such as enacting ordinances and initiating programs focusing on health.

On the same occasion, the BHWs received P1, 200 each as an honorarium from the Provincial Government of Mountain Province.

This post has already been read 561 times!TABUK CITY, Kalinga – With the voter’s registration extended, the Commission on Elections