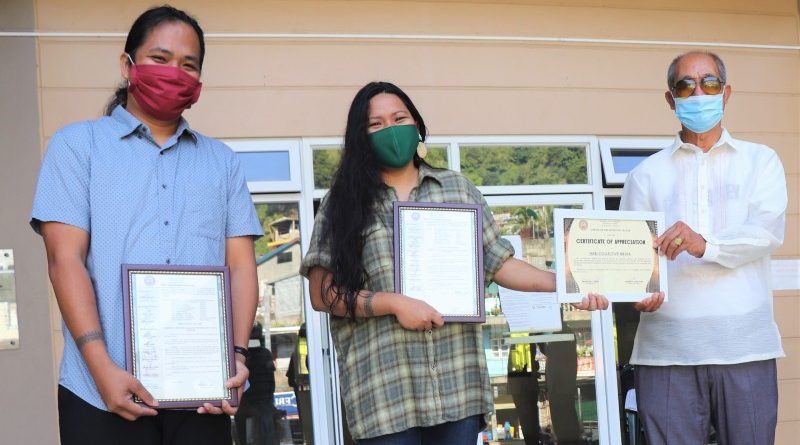 BONTOC, Mountain Province – Two film makers, who both trace their roots in the Ilokandia and Tagalog regions, and have opted to make this town their home for almost six years now have recently been adopted as son and daughter of Bontoc.

As adopted children of Bontoc, Valle was given the name “Ngawit” while Ocampo was named “Khayapon.”

Their adoption was witnessed by municipal officials and employees of the Bontoc Local Government Unit (LGU) during the regular Monday Flag Raising Ceremony on September 28, 2020, at the Bontoc Municipal Capitol grounds.

According to Mayor Franklin Odsey, the adopted son and daughter of Bontoc have embraced and respected the culture and traditions of the community. He added that their talents and skills in the production of the documentary film “Walang Rape sa Bontoc” (Bontok, Rapeless) and short film “Tokwifi” have garnered international and national prestigious awards that brought recognition and have put the municipality and the Ifontoks in the spotlight. Thus, it is proper and fitting to adopt Valle and Ocampo as Ifontok.

Mayor Odsey immediately approved the resolution passed by the Sangguniang Bayan affirming that Valle and Ocampo have shown remarkable and admirable character worthy of emulation by the Bontoc community and have unselfishly shared their talents and skill to young people of Bontoc.

The documentary film “Walang Rape sa Bontoc” was directed Valle, and was written by Ocampo in 2014. It garnered international and national awards, and has been recognized by numerous government agencies, private and public institutions, and academes in their advocacy towards Gender and Development (GAD). Among the notable awards conferred to the documentary film include Special Jury Mention in the CineTotoo Philippine International Documentary Film Festival 2014, Finalist Certificate in the New York Festivals Best TV and Films 2015, Special Citation in the Gender- fair Documentary – GADTimpala Awards 2015, Best Documentary in the 38th Gawad Urian 2015, Breakthrough Film Award in the 9th Pandayang Lino Brocka 2017, and Inner Wheel’s Choice in the 9th Pandayang Lino Brock 2017.

Meanwhile, the short film Tokwifi directed by Ocampo in 2019 is the Best Film and NETPAC (National Network for the Promotion of Asian Cinema) Award in the 2020 Cinemalaya, a major film festival in the Philippines. The short film was co-produced by the Bontoc LGU and was shot in locations within the town. It features artists and members of the community.

Aside from their talents and skills, Valle and Ocampo have displayed the innate character of Ifontok, the spirit of Og-ogfu (Bayanihan) in times of need and crisis. Valle and Ocampo were instrumental in accessing of Personal Protective Equipment (PPE) from the Office of Vice President Leni Robredo to the Municipality of Bontoc. The PPEs were used by frontliners in the Coronavirus Disease – 2019 (COVID-19) response and operations.

In an interview, Valle and Carla both responded that they are overwhelmed by being adopted son and daughter of Bontoc.

“Of all the recognitions I received because of the work we do, this is the most meaningful – to be declared by the Ifontok community as one of their sons. I will wear this identity with pride wherever I go and wherever life may lead me,” Valle mentioned.

Also, Valle took the adoption as a symbolic way of inheriting the history of the struggle and the challenges that the Bontoc people continue to face as a community such as the discrimination to the Indigenous People (IP) and customary laws and rights and committed to be one with the

Bontoc community in facing these issues.

Ocampo likewise expressed her happiness and admitted that she was emotional when the resolution of their adoption was being read.

“To be welcomed by a town as one of its children is an unimaginable honor to us. And yet, it’s here. We’re here,” Ocampo said.

When asked of the reasons of why they decide to make Bontoc their home, Valle and Ocampo enumerated their appreciation of the Ifontok people and the place. For both who grew up in the city, they appreciate the favourable climate, good environment, and the culture of Og-ogfu the Ifontok way.

As film makers, Valle and Ocampo yearn to document as many of the valuable practices of the Bontoc community as they can.

This post has already been read 875 times!The city is not yet inclined to open inter-regional public transportation to avoid