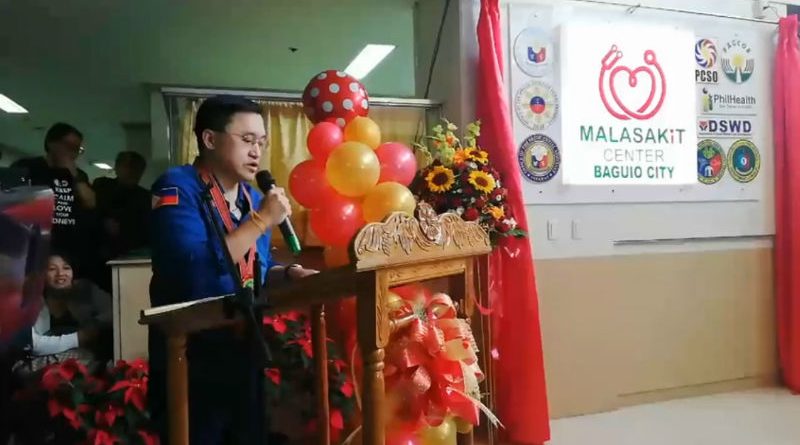 Senator Go, chairman of the Senate committee on health, was accompanied by Presidential Assistant for the Visayas Michael Lloyd Dino, Health Undersecretary Roger Tong-an, a native of Benguet, and actor Philip Salvador  during the opening of the said center.

The lawmaker also turned over to hospital officials led by BGHMC medical center chief Ricardo B. Runez, Jr. a check amounting to P5 million from the Office of the President to start the operation of the malasakit Center aside from providing another P5 million from his medical assistance fund to augment the center’s sustainable operation.

Under the concept of the Malasakit Center, 4 government agencies, particularly the Department of Health, Department of Social Welfare and Development (DSWD), Philippine Charity Sweepstakes Office (PCSO) and the Philippine Health Insurance Corporation, will converge in providing the medical assistance requirements of patients confined in the hospital who are not able to fully settle their hospital bills because of insufficient funds wherein the balance that will not be provided by the said agencies will be shouldered by the center funds that were provided for the said purpose.

“ We are just bringing back to the people the benefits that they should enjoy, especially in addressing their health concerns. The funds for the sustainable operation of the center comes from the people that is why the people deserve the utmost benefit in return,” Senator Go stressed.

He added that his bill providing for the establishment of Malasakit Centers all over the country already passed second reading this week and will be passed on third and final reading next week, thus, the House of Representatives must also act on the counterpart bill so that there will be a common criteria for the put up of such centers in different government hospitals and provinces in the country.

Senator Go urged the PCSO and PhilHealth regional offices to increase their exposure in the Malasakit Center so that it will be able to cater to the health care needs of the patients confined in the hospital considering that the health of the people is one of his major advocacies that should be given preferential attention by concerned government agencies considering that the existence of healthy people will translate to a productive society.

The BGHMC Malasakit Center is the first to be established in the Cordillera Administrative Region by the senator who had been pushing for the existence of such center in government hospitals for the health care requirements of the people.

Based on the data presented by Dr. Runez, BGHMC has an annual population of more than 39,000 in-patients and over 300,000 out-patients monthly seeking for different medical interventions for their various illnesses.