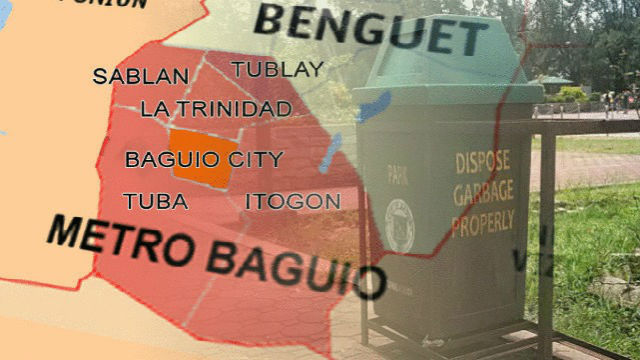 BAGUIO CITY  – The Cordillera office of the Environmental Management Bureau (EMB-CAR) confirmed that the Office of the Ombudsman is investigating the local governments of Baguio-La Trinidad-Itogon-Sablan-Tuba-Tublay (BLISTT) for their compliance to the pertinent provisions of Republic Act (RA) 9003 or the Ecological Solid Waste Management Act.

Reynaldo S. Digamo, EMB-CAR regional director, confirmed that he received a letter from the Ombudsman requesting the agency to provide copies of the 10year solid waste management plans and the site and closure plans of the concerned local governments for review, evaluation and assessment.

“We provided the Ombudsman with the available documents relative to the compliance of the concerned local governments to existing solid waste disposal laws and we leave it to the office’s sound discretion on what to do with the documents on what future actions to take against the local officials,” Digamo stressed.

Under the pertinent provisions of RA 9003, all local governments are mandated to prepare and submit to the NSWMC for approval their 10-year solid waste management plans that will serve as their blueprint in addressing their solid waste concerns as well as for the said local governments to close the operation of their existing open dump facilities and replace the same with environmentally acceptable dump facilities to address the health and environmental concerns of the people.

According to him, as far as the six local governments, there has been substantial compliance on the part of the concerned local officials to the provisions of solid waste management laws, rules and regulations but it will now be up to the Ombudsman to appreciate their compliance to the submitted records available in their office.

The Ombudsman’s request to the EMB-CAR was an offshoot of various complaints that were filed by concerned groups and individuals relative to the alleged failure of the previous and present officials to comply with the provisions of existing solid waste management laws, rules and regulations.

Digamo assured the Ombudsman their cooperation to the investigating body once they will need more documentary requirements and their findings and recommendations on the compliance of the concerned local governments to the said laws considering that there are serious allegations for the failure of the local governments to address the garbage problems in their areas of jurisdiction.

He explained the EMB-CAR is constantly monitoring the compliance of the local governments to their approved 10-year solid waste disposal and management plans and related laws, rules and regulations, especially the eventual determination of the permanent solutions to their garbage problems considering that what has been put in place are simply stop gap and temporary measures to mitigate the occurrence of garbage crisis in their places. By HENT

12     12SharesFirstly, great emphasis is given that the contents of this series are intended to give Biblical information and insights on