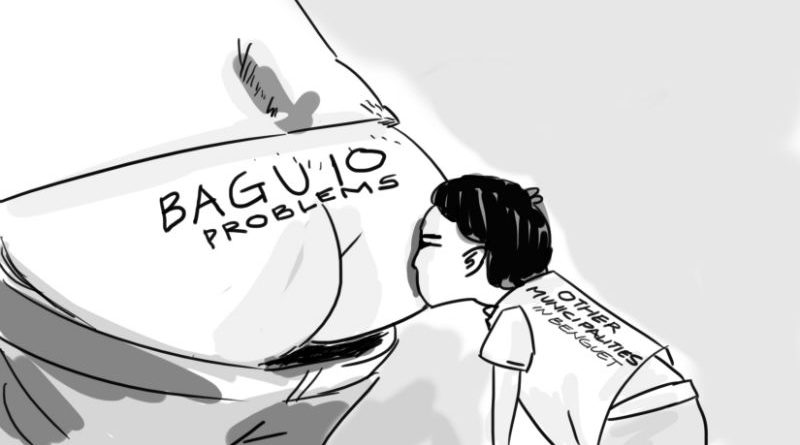 In 1995, results of a European Union (EU) urban planning study in  Baguio City showed there will likely be congestions in the city in the next several decades primarily because it is a frequently-visited place and a suitable area for investments, thus, one of the principal recommendations was to establish the Baguio-La Trinidad-Itogon-Sablan-Tuba (BLIST) growth area so that development will be spread out in the nearby towns of Benguet to aver the serious negative effects of rapid urbanization to the status of the city as the country’s undisputed Summer Capital. Part of the recommendations contained in the World Bank-funded study was for the construction of inner and outer circumferential roads to serve as alternate routes for motorists to take in going to and from their desired destinations within the BLIST without passing through the city’s central business district and to help entice investors to consider infusing their capital to their projected businesses in strategic areas of the BLIST.

Initial, the BLIST concept as presented in the study was opposed by Benguet provincial officials and local chief executives of the towns of La Trinidad, Itogon, Sablan and Tuba primarily because the proposed growth area was designed to solve the rapid urbanization problems of Baguio City and allow the Benguet municipalities to absorb the problems with the utilization of the available lands in their areas of jurisdiction to serve as garbage disposal sites, housing projects, tourism growth areas, among others, which were not acceptable. Benguet officials stood firm in their position that if the BLIST concept will be implemented, it should be a holistic approach to address the prevailing problems of all the involved local governments and not for Baguio City alone because they can survive even without Baguio City.

Another series of studies done by the Cordillera Regional Development Council (RDC) came up with the proposal to include Tublay town to the BLIST due to its proximity thus creating BLISTT which is now being revived. While local officials of the member local governments are religiously attending the scheduled meetings of the created BLISTT Governing Board and BLISTT Development Council, most of them do not actually feel that the issues and concerns of the BLISTT as a whole are being given the appropriate attention because discussions always center around the problems of Baguio city and how to solve the same, thus, a number of them are simply sending their representatives for compliance sake.

Truly, proposed legislation that cover trans-boundaries of different local governments should take into consideration the rights of indigenous peoples (IPs) whose territories are subject to such measures. Lawmakers, foremost of which are those who represent the different districts in the Cordillera Administrative Region, should be reminded that the Indigenous Peoples Rights Act (IPRA) upholds the native title of indigenous peoples over their ancestral domains, their traditionally-owned territories. Bills that affect the rights of IPs over these territories, the environment, among other concerns, should not be allowed to hurdle both chambers of Congress without the full and meaningful participation of indigenous peoples. Without quality and rights-based approach to the development of ancestral domains, either through programs or legislation, these can surely ignite conflicts that will create more serious problems. The indigenous peoples mandatory representatives should be consulted but the final say on developments lies in the indigenous communities. Before us is still the refiled bill creating the BLISTTDA which contains blatant loopholes that will have a serious negative impact on the autonomy of local governments. For indigenous peoples, let us be reminded that the provision of this bill does not uphold our substantive participation in all measures affecting our  rights. It does not explicitly invoke the rights to free prior and informed consent as ensured by the IPRA. It is one proposed measure that again only centers on Baguio. One of its provisions call for the relocation of people out of the city. However, it promotes business development. Again, let us be vigilant in monitoring the performance of our Congress representatives and push then to recall this bill.

We should not allow legislations to be simply railroaded and enacted right in front of our noses and when we will wake up someday, it will be business that rules our city and own the lands, and us at the fringes, simply because we left it to business to legislate their interests in Congress.

Let us be critical constituents of our Congress representatives but at the same time, push our local governments to ensure that our lands and resources are developed with us, for us and by us. We still have to see if the Benguet towns continue to be lame duck members of the BLISTT or eventually break out and independently exist and allow Baguio City to solve its problems.