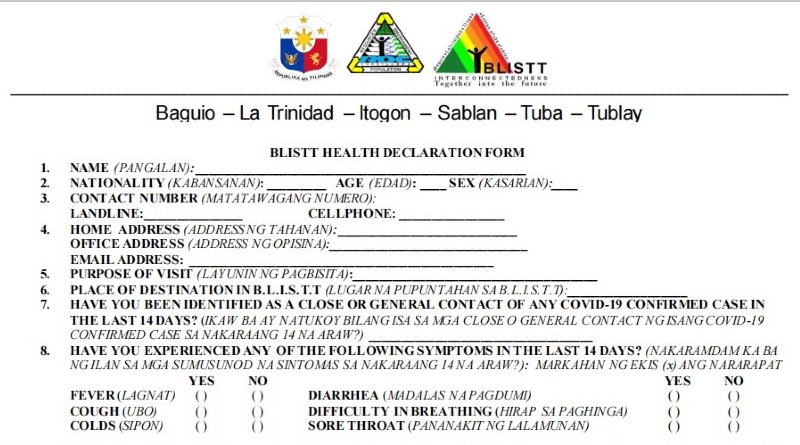 BAGUIO CITY – The BLISTT Governing Council composed of the chief executives of the BLISTT (Baguio City, La Trinidad, Itogon, Sablan, Tuba, and Tublay) decided to continue their efforts to mitigate the spread of the COVID-19 virus by enforcing border checkpoints again from January 10 to 24 to address the high daily attack rate of the virus and the positivity rate in tests. Travel restrictions are once again limited to official business and access to essential goods and services.

Everyone passing through any of the border checkpoints must present a health declaration form, as well as a valid government ID as proof of residence. Exemptions are afforded to uniformed personnel, members of the city, provincial, and municipal contact tracing teams and members of the COVID Task Force, local governments, and government agency personnel. Logistics and services providers for water, electricity, ICT, and waste management will be given unhampered passage through the checkpoints.

The decision was made after data gathered by Cordillera office of the National Economic and Development Authority (NEDA-CAR) from the previous BLISTT border restrictions last November and December showed the high positivity rate for Baguio City, La Trinidad, Itogon, and Tuba as of the end of December. Results for the first border restrictions showed lower cases for Baguio and Tuba while the average daily attack rate increased for Itogon.

This is most apparent in Baguio City with its larger mass testing capacity. BLISTT Chairman and Baguio City Mayor Benjamin B. Magalong previously emphasized that limiting the mobility of the population is a key strategy in mitigating the spread of the virus.

To prioritize health and safety, the mayors urged everyone to limit their movement and activities particularly senior citizens, children, and the immunocompromised as the LGUs continue with their efforts to increase their capacities for testing and contact tracing.

The BLISTT Governing Council is an inter-local cooperation body that seeks to address concerns affecting the area. The body has been crucial in coordinating efforts to mitigate the spread of the virus in the BLISTT as well as in Benguet and the rest of the Cordillera. The NEDA-CAR currently acts as Secretariat to the Governing Council. By NEDA-CAR

This post has already been read 1111 times!It’s a rare sight to see Team Lakay fighters seethe and seemingly lose