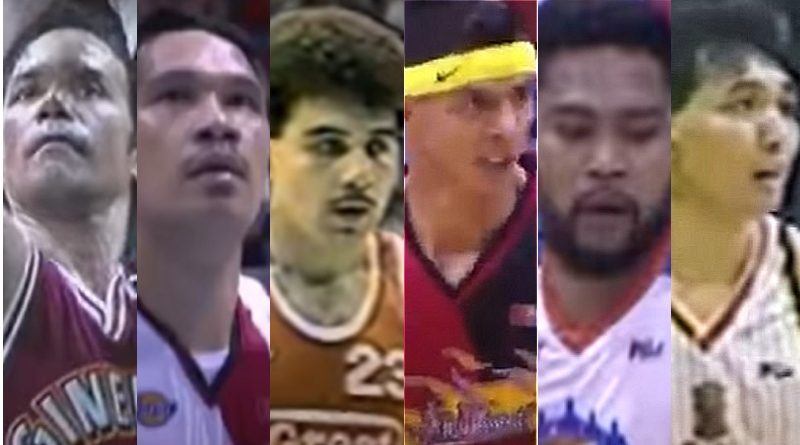 Ever wondered how heroes of different PBA eras: from the center dominated 70s and 80s eras where Ramon Fenandez and Abet Guidaben reigned, or the isolation filled, three-second rule era 90s dominated by Alvin Patrimonio, to the Danny Ildefonso led 2000s and the guard dominated 2010s fare against each other?

Will June Mar Fajardo, who carved a claim of being the best ever cager while playing during an era where the three point shot is a main weapon, be as effective in the 1990s?

How about Hector Calma, arguably one of the top two point guards ever but rarely attempted a three point shot during his heyday? Can a team still rely on his skill set today to win championships?

Have you ever imagined the thought of assembling PBA team that could take any comers if you have all players that set foot in the PBA in their primes at your disposal?

Let me tickle the PBA fan in you and join me in this fantasy game as I attempt to do that, assemble a team that could take out any team in any era in the PBA.

Let’s just put only one rule in this game: let’s be realistic and agree that there is only one ball to share and putting five scorers or any five superstars in the team wouldn’t work.

Let’s bear in mind not everybody gets to control the ball. Somebody has to eat their pride and take a role other than constantly putting the ball through the net.

Here’s how I would build my team: my primary consideration would be to establish a team full of players who can play multiple positions, can score and can defend.

Given this double-bladed characteristic, I would have to establish who I want to build my team around with. They will come in three aspects: the floor director, the paint protector, and the scorer.

I’d like to establish an inside presence and a post threat first on both ends of the floor.

There is little to argue here. The six-time MVP’s skill set is proven to be effective today. I sense it is even more suitable during the earlier eras.

At almost 7-feet, “The Karken” would almost be playing like an import in the 70s and 80s and would certainly attract double and triple teams in the 90s and 2000s.

The next guy I would like is the man who would be getting the ball when the team needs baskets.

Since the team’s center doesn’t have a reliable outside shot, I would like my main scorer who would be at the same time the go-to-guy in the clutch, to have the ability to make baskets from the outside, can take the action in the paint, and is efficient from the floor.

This will enable the the team to play in different era styles.

Enter: The Quick Brown Fox, a point guard who is the owner of the highest scoring average in PBA history at 23.1 points per game with excellent conversion percentages from any part of the floor including the best percentage from the free throw line over a career at 87.9%.

This will be the guy who the team will give the ball in crucial parts of a close game and expect to deliver the basket. I like his ability to create his own shot and to drain the much needed basket during crunch time.

The fact that he can play point excellently, as evidenced by his owning the highest assist average among locals at 7.3 per game, is a big bonus because the team can add another shooter on the field whenever the team needs more firepower.

In view of having flexibility in Brown’s skill set, I would move him to shooting guard in the starting lineup and pair him with the 6’1” “Big J” at point.

Jaworski is one of the most unselfish floor directors the league has ever seen. He owns the record for most assists in league history (5,825 total) and is one of the best in finding teammates for open baskets (6.1 per game).

Aside from that, he can also put the ball in the basket in a variety of ways and is a physical defender.

His decent three point shot will forced his defenders to play honest defense on him but they could not they play him tight because he can barrel inside.

The Jaworski/Brown guard combination would be a hard matchup during any era.

Both men are oversized for a point guard, can play both guard positions, can shoot the three, can definitely pass and can defend their positions.

Combined with Fajardo inside, the trio will force defenses, be it zone, switching, or man-to-mam, to be honest at times or get burned when cheating.

With the source of scoring now properly delegated, I would like the two remaining positions to be primarily both Jacks of all-trades, all-around guys.

The one-time MVP’s embracing of the role entrusted to him by San Miguel during their latest championship run would make fit him like a glove at small forward for my team.

His ability to play both forward and the two guard positions as well as hit the trey are the key offensive skills while his ability to limit his man’s production will bode well on the other side.

He would anchor the defensive end and his scoring abilities with extended ranged would deter the opposing defenders from doubling off him.

His ability to contribute in multiple areas of the game even if he doesn’t have the ball would allow more room for Jaworski to handle the ball most of the time and set primary options Fajardo and Brown to get their shots off.

I was impressed at his showing in the 2013 FIBA Asia Championship and the 2014 FIBA World Cup. The RDO in these tournaments would complete the puzzle for my team.

His being arguably the best “stretch four” ever in the PBA with the ability to play the post would be a perfect complement for both Fajardo’s inside game and Brown’s outside presence as well.

Like Santos, he doesn’t need the ball to make contributions to the team, can defend bigger guys at his position and would seldom be left open because he can hit the shot at extended range.

This is in anyway not a shot at “The Triggerman”. I initially put him in the starting unit for Santos or De Ocampo but realize he would take away a potent all-around player who is a better defender if so.

He would be way better off doing his scoring thing if he takes over the scoring cudgels whenever Brown or Fajardo are not on it and will be an excellent scoring leader for the second string.

He is the “Kevin Mchale” of my team. He can replace anyone in the starting five at anytime, will be playing starter minutes, and will be on the floor on offense during the dying minutes of a cardiac game.

He will definitely start the game if the team needs more firepower than the rebounding and defense.

I thought of putting Billy Ray Bates’ explosiveness here but Brownlee, who is 6’4″ and able to play shooting guard and  both forward positions, has a better all-around game to pass up when it comes to improving the team.

Brownlee would be the perfect complement to this team during import laden conference because of his skill set, pushing either Santos or De Ocampo to the bench. However, he could replace any member in the starting lineup and still raise the potency of the team.

His willingness to defer to his teammates but a very reliable scoring option when needed to as shown with Ginebra and Alab Pilipinas and being calm and focused on the task at hand even in hotly contested games would even enhanced the already potent two-way characteristic of the team.

He is not a bad defender at all and could become another cool option in crunch time.

Can anyone come up with a line-up who can challenge this team in any playing style?

September 22, 2021 Hent Comments Off on DOLE urged to entrust selection of TUPAD recipients