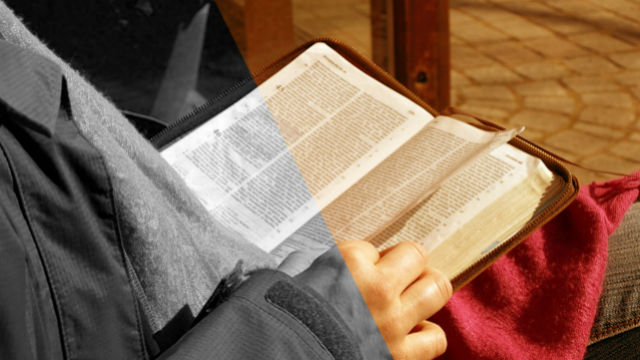 The bible is the best selling book of all-time. It but natural that some of its contents will used in various fields and industries.

Here are just some of the instances where the contents are used and depicted in accordance within the bounds of the context as they were used in the bible.

Ghost Rider: “My name is legion, for we are many”

The dialogue occurs nearly at the end of the movie. Using a  lost contract of San Venganza, Blackheart absorbed a thousand human souls and promptly declares: “My name is legion, for we are many”.

It became his weakness as Ghost Rider used his “penance stare” to defeat the demon villain.

This is an actual verse in the bible indicating a similar situation except the roles are reversed: there are many demons possessing one human being in the bible story instead of the one demon absorbing many human souls depicted in the movie.

Here is the movie clip:

1Then they came to the other side of the sea, to the country of the Gadarenes. 2And when He had come out of the boat, immediately there met Him out of the tombs a man with an unclean spirit, 3who had his dwelling among the tombs; and no one could bind him, not even with chains, 4because he had often been bound with shackles and chains. And the chains had been pulled apart by him, and the shackles broken in pieces; neither could anyone tame him. 5And always, night and day, he was in the mountains and in the tombs, crying out and cutting himself with stones.

6When he saw Jesus from afar, he ran and worshiped Him. 7And he cried out with a loud voice and said, “What have I to do with You, Jesus, Son of the Most High God? I implore You by God that You do not torment me.”

8For He said to him, “Come out of the man, unclean spirit!” 9Then He asked him, “What is your name?” And he answered, saying, “My name is Legion; for we are many.”

10Also he begged Him earnestly that He would not send them out of the country. 11Now a large herd of swine was feeding there near the mountains. 12So all the demons begged Him, saying, “Send us to the swine, that we may enter them.” 13And at once Jesus gave them permission. Then the unclean spirits went out and entered the swine (there were about two thousand); and the herd ran violently down the steep place into the sea, and drowned in the sea.

14So those who fed the swine fled, and they told it in the city and in the country. And they went out to see what it was that had happened. 15Then they came to Jesus, and saw the one who had been demon-possessed and had the legion, sitting and clothed and in his right mind. And they were afraid. 16And those who saw it told them how it happened to him who had been demon-possessed, and about the swine. 17Then they began to plead with Him to depart from their region.

18And when He got into the boat, he who had been demon-possessed begged Him that he might be with Him. 19However, Jesus did not permit him, but said to him, “Go home to your friends, and tell them what great things the Lord has done for you, and how He has had compassion on you.” 20And he departed and began to proclaim in Decapolis all that Jesus had done for him; and all marveled. Mark 5:1-20, NKJV

It also made its theme clear. While there are many tales narrated by the bible, one thing remains clear from start to finish: The devil rebelled and continues to rebel against God and dragged humans along to be involved in this godly battle he started.

The danger posed prompted Jesus to come to earth and provided everyone a way to get out of the mess.

These verses encapsulates what the new testament is for. If you are encourage by these verses, it wouldn’t hurt to get a copy and find out more.

This post has already been read 4276 times!The city is looking for a private entity that is willing to partner