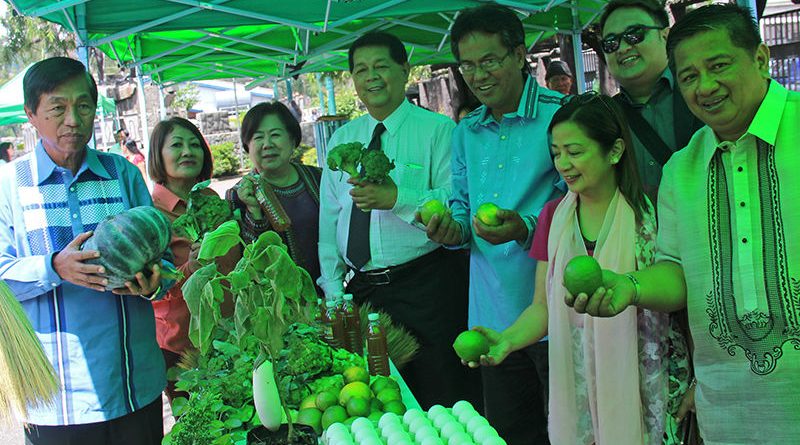 PURELY BAGUIO ORGANIC PRODUCTS – Mayor Mauricio Domogan and Councilors Lilia Yaranon,Elaine Sembrano, Edgar Avila,Mylen Yaranon, Roberto “Pacoy” Ortega Jr and Elmer Datuin show off the organic produce of city-based farmers during the Agri-Tourism Fair as part of the celebration of Urban Farmer’s Month coordinated by SP Committee of Market, Trade and Agriculture chairman and Councilor Leandro Yangot Jr.  The Agri-Fair was from May 21 to 31 at the Igorot Garden. – By Bong Cayabyab 05/27/18

BAGUIO CITY  – Mayor Mauricio G. Domogan urged residents in the city’s one hundred twenty eight barangays to use all available spaces in their houses for better food security, enhance beautification efforts and contribute to the improved image of the city as a producer of organic agricultural crops.

Domogan hailed efforts of organic practitioners in some of the city’s barangays in advocating for the practice of urban gardening and backyard farming in their neighbourhood so that the city will be able to become a major producer of organic vegetables that will add up to the supply of organically grown crops in an urban area like the city.

“We call on our people to use whatever available spaces in their backyard to produce organically raised agricultural crops so that we will have a sustainable supply of organic crops which is now the demand of the present times. We hope that we will be able to realize the existence of urban gardens around the city be part of the city’s major attractions,” Domogan stressed.

Domogan was the guest of honor and speaker during the opening of the 11-day agri-tourism fair at the Igorot Garden which will run from May 21 to 31, 2018 wherein organically raised crops will be featured in the said area.

Councilor Leandro B. Yangot, Jr., chairman of the City Council Committee on Market, Trade, Commerce and  Agriculture, underscored the institutionalization of the celebration of Urban Farmers’ month in the city has gave a big boost to organic practitioners to strongly advocate for the establishment of urban gardens in their neighbourhood which is now being replicated by other interested residents in other barangays of the city.

Aside from the display of of organically produced agricultural crops, Yangot said that there will also be various lectures in the production of organic vegetables which will be done by the practitioners themselves so that they will be able to invite interested residents to replicate their success stories.

Apart from the conduct of the agri-tourism fair, part of the celebration of Urban Farmer’s month this year is the judging of the Best Urban Garden and Edible Backyard Farm wherein some 43 entries from the different barangays were able to signify their intention to join the contest that offers attractive prizes to the winners who will be judged by the assigned committee.

Domogan and Yangot conveyed their greetings and congratulations to the participating organic practitioners who are now increasing in number because they were able to prove to the residents of the city that maximizing the limited spaces in their homes will contribute in efforts to improve food security, provide beautification and guarantee ample supply of organic vegetables which is now being patronized by increasing number of residents and visitors alike.

From 8 participating barangays last year, Yangot revealed that the number of participating barangays to the celebration of Urban Farmer’s month increased to 16 this year which means that there are numerous residents who are now trying to embrace organic farming as a way of file to contribute in efforts to provide added attractions in the city, especially those who are health conscious and are looking for sufficient supply of organically produced vegetables.