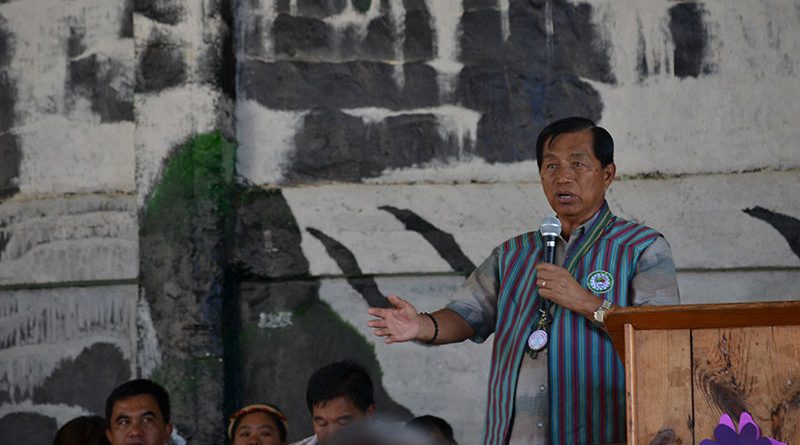 BESAO, Mountain Province  – Baguio City Mayor Mauricio G. Domogan challenge every resident to individually and collectively contribute in overall efforts by the local government to preserve their own identity during the fast changing times in the global village to help them move on to greater heights.

Speaking before thousands of of residents and visitors that gathered oat the Besao Central School gymnasium for the opening program of the town’s 114 founding anniversary and 10th Ubaya festival, Domogan, who traces his roots from barangays Agawa, Laylaya and Catengan here, underscored that everyone must impose upon himself or herself the duty to do the right things in life to be able to achieve the theme of this year’s festivities.

The theme of this year’s town fiesta and Ubaya festival as agreed upon by the organizing committee is “Besao Goes International: Sustaining the Besao Identity in a Global Community.”

“We must individually ask ourselves on what will be our simple contributions in ensuring the preservation of the Besao identity in the global community. WE must start doing things right before we will be able to convince others to follow our footsteps,” Domogan stressed.

He also challenged the senior citizens and parents, being the first teachers of children, to teach them the right values and do things right by not engaging themselves in bad vices such as drinking liquor, gambling among others so that the youth will respect them and obey what they are telling them.

For teachers, who are the second parents of children while in school, he urged them to impart to the youth the necessary values that they should possess to help them grow and become responsible and dedicated citizens of the locality and send a clear message to the world that people of Besao are worthy of emulation.

For the youth, Domogan reminded them to learn to respect their elders, obey their orders, learn to live simple like what the people had been doing in the past and be the messengers of good deeds to other youth from other places so that they will be able to establish that distinct identity that Besao people had been known in the global village.

He also narrated to the specatators his hardships in life in bringing bottles of honey and several kilos of crabs from Balas-iyan to the town proper of Kin-iway, Padangaan and Payaeo just for him and his friends to have money for his education needs.

However, he expressed disappointment that despite efforts by the concerned government agencies and the local government to implement programs to restore the values of the younger generations, today’s youth seem to defy the odds that is why it should be a consolidated effort to help them realize that there is still much room for improvement and that they must be willing to embrace the necessary change that come their way as they hurdle the obstacles that confront them on their way to success.