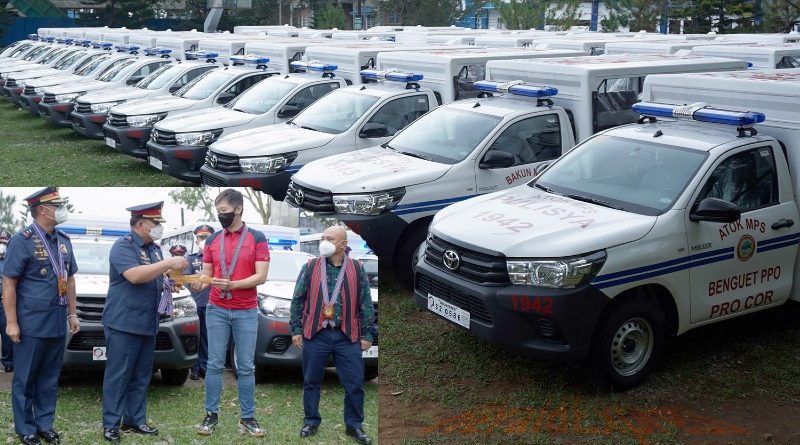 Azurin, who was the Provincial Director of Benguet from 2013-2015, stated that the availability of the 15 patrol cars for Benguet was through the persistent effort of Congressman Yap who wanted to make sure that each of the province’s 13 towns will be provided with a new police patrol car to aid law enforcers in effectively and efficiently discharging their duties and responsibilities.

The PNP official disclosed that actually, there were only 5 patrol cars that were earlier earmarked for Benguet under the PNP’s capability enhancement program but Congressman Yap informed the PNP leadership that he will not accept the same if it will not be increased to 13 which was immediately approved by the leadership.

Aside from the 13 towns, the 2 provincial mobile force companies in Buguias and La Trinidad were also given their brand-new patrol cars.

The 15 patrol cars were part of the 37 patrol cars and personnel carriers which had been earmarked by the PNP leadership for the various provincial police offices in the Cordillera where Abra was allotted 7, Mountain Province 6, Kalinga and Ifugao – 4 each and Baguio City – 1.

Azurin claimed that the distribution of the 15 patrol cars to Benguet alone is unprecedented in the history of the PNP because all the 13 municipalities were given a new patrol car all at the same time but the same is greatly helping equip the various police stations for them to be able to perform their assigned duties and responsibilities in maintaining law and order not only in the province but also in the whole country.

According to him, the total cost of the 37 police patrol cars that were delivered have an allocation of around P57.65 million which was part of the P1 Billion that had been earmarked by the PNP for the continuing capability enhancement program.

For next year, Congressman Yap announced that the PNP had been provided around P1.5 billion to sustain the implementation of the capability enhancement program related to mobility, the provision of arms and communication equipment to help in maintaining decent law and order in the different parts of the country.

Yap is also sourcing out funds for the construction of a building for the Benguet Provincial Police Office within a 1,000-square meter lot that was donated by the provincial government for the same to have its permanent structure that will be based outside the compound of the Police Regional Office (PRO) in the Cordillera. By HENT

This post has already been read 1725 times!LA TRINIDAD, Benguet – Benguet caretaker congressman and Anti-Crime and Terrorism through Community