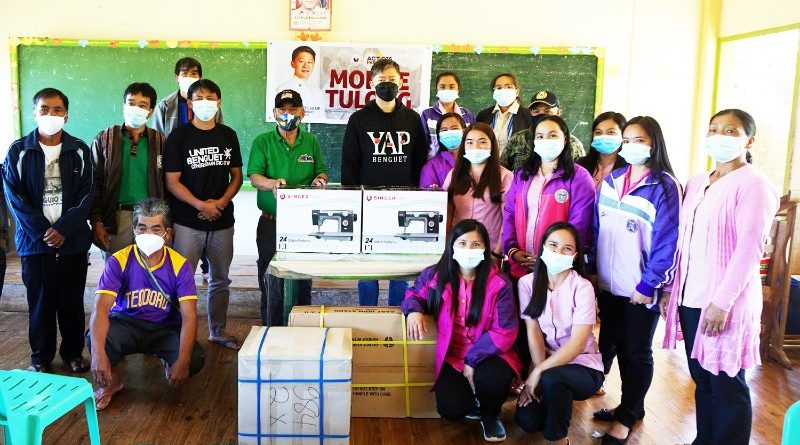 KIBUNGAN, Benguet – Benguet Caretaker Congressman and Anti-Crime and Terrorism through Community Involvement and Support (ACT-CIS) Party-list Rep. Eric Yap fulfilled his earlier promise to the people of the remote village of Tacadang as he went back to the said barangay to personally hand over to the beneficiaries the four heavy duty sewing machines and financial assistance to some identified receipts.

Yap, who chairs the powerful House Committee on Appropriations, flew to  Tacadang in the company of personnel of the Cordillera office of the Department of Social Welfare and Development (DSWD-CAR) to hand over the promised sewing machines and the financial assistance to the identified 25 recipients to help them partially cope up with  the heavy impact of the ongoing COVID-19 pandemic that had affected the global economy for over one and a half year.

The lawmaker explained that the four sewing machines will be used by the teachers in the Tacadang Integrated School for their livelihood activities aside from them being used as additional tools in the subject technology and livelihood education of the senior high schools who are enrolled in the senior high school and have opted to take the said subject.

Further, Congressman Yap also informed the people that the promised road opening project had also been started with the initial funding of P200 million and another P200 million included in the annual budget of the national government next year for the same to be realized the soonest.

In his visit to Tacadang early this year, the Benguet caretaker congressman promised to donate the needed sewing machines and provide appropriate assistance to the identified recipients through the DSWD’s Assistance to Individuals in Crisis Situation (AICS).

According to him, the two priority projects which he envisions to be completed will be initially for the opening of the roads leading to the said barangays and that funds for the concreting of these roads will be allocated in the future budgets of the national government for the realization of the good roads leading to the still in linked communities of the province.

In the proposed annual budget of the public works department next year, the caretaker congressman included a substantial amount for the road opening projects that had been identified as priorities, particularly the Tuba, Benguet to San Manuel, Pangasinan; Itogon- Benguet to Kayapa, Nueva Vizcaya among others aside from the continuation of the said projects.

Yap underscored the importance of prioritizing the opening of roads leading to the identified communities prior to the implementation of concreting works so that the impact of the projects will be realized by the people the soonest and for them to be able to establish their desired economic activities that will contribute in spurring development in their respective communities. By HENT