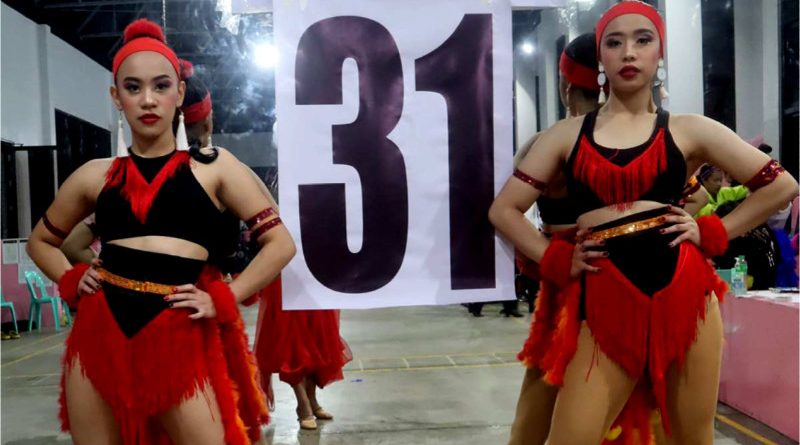 LA TRINIDAD, Benguet – They almost did not join.

But then people came to help and so they danced their way to a gold, three silver and a bronze medal.

And it was a tough competition with more than 40 participants in some categories and some from other Southeast Asian countries.

And with the Benguet and Baguio tandem of Mary Luz It-itan and Jessica Ogbinar topping the Open Latin Female for duo category of the 8th Geraldine’s Online Dancesport Competition over the weekend at the Quad Fitness gym here, the Benguet Dancesport team was more than happy to see seven weeks of hard work paying off.

And it was coach Charibelle Pingawan who is the happiest with their participation to the event after missing out on the Central Ball last month.

Team Benguet finished with a 1-3-1 gold-silver-bronze performance during the two day competitions that saw competitors from all over the country and other countries.

The dancesport online showdown saw the duos of Erick Cabloy and Ashley Aniwas placing second in the Junior Latin Male and Mico Dumalos and Mark Benter also coming out with a silver in the Open Latin Male, while Jayson Abenoja also taking the same medal in the Open Standard Male solo.

“We trained hard (for this competition) because we know it will not be easy for us,” Pingawan in a private message told this writer in mixed English and Tagalog.

“We know that we will pass through the needle’s eye,” added Pingawan, who was so frustrated when her team failed to join the last month because of financial and venue problems.

These challenges and frustrations, drove her team to train harder, as they competed against dancers not only from the Philippines but also from other countries like Singapore, Taiwan and Malaysia.

“I can’t actually explain the feeling, It (ha)s been hard for us because the past months and weeks that at one point we were thinking of letting this competition go,” she added.

“The training itself hindi naman kami nahirapan (we did not have much difficulty) until the Region of Cordilleras was put into GCQ and andaming (so many) restrictions of course, Yun na yung few weeks na lang competition na (In a few weeks, it is competition time already),” she explained.

After posting on Facebook that they may not be able to join the competition, friends pooled resources as well as provide morale support for them to push forth.

“But with each other’s support from the team and friends we planned to push through,” she added.

The support was a surprise for her. She exclaimed: “I didn’t expect that, andaming sumusuporta sa dancesport ngayon (there are many supporters of dancesport now) unlike few years back.”

Her athletes from Baguio were able to come here, while she was also able to go to Baguio and purchase materials for their costume.”

She explained: “We had a team physician for our medical certificates so my athletes residing from Baguio can come here at La Trinidad and kami na (us) from LT can go to Baguio City since that time we were looking for costumes for the comp so we need to go to Baguio City. And I secured a special permit from the Mayor’s Office for us to train at Quads Fitness Gym since gym operation is limited during GCQ [general community quarantine].”

Last month, the team failed to join the Central Ball with the deadline of submission set at January 14.

“Unfortunately, haan kami matuloy idiay (we will not push throught with the) Central ball since were not allowed to register since (the deadline) to register was January 14,” said Pingawan after they forfeited joining said event, another online competition.

“But we were endorsed for an upcoming national private competition to be held on February 20,” added then Pingawan referring to the 8th Dance Challenge.

Then they actually needed a venue where they can video their routine which was a challenge as Quads refuse to make them use the gym on Sundays since there are religious groups using some of the rooms of the buildings where the gym is located on said day, a worship day.

She later tried looking for a Sunday venue, the post elimination portion of the competition and even asked the La Trinidad local government for the use of Lednicky Hall, which earlier was denied to them since Sunday is sanitation and disinfection day.

Days before the competition, they were also unsure of making use of the Quads gym, but then were allowed to make use of it just a few days before competition.

She said: “And we were more than happy that Quads Fitness Gym owners finally decided to accommodate us during the competition because I almost asked a dozen of friends, from BSU and LGU but unfortunately there are no available facilities or even if there is, it will not be allowed for public or outside use.”

While she worries for the costume and venue, her athletes continue to train.

She said: “Actually, I don’t want my athletes to worry that much, I wanted them to focus on their training, so I told them not to worry much on the expenses and I will do my best to ask for sponsorships. I regularly update them on who were helping us financially and sending us words of motivation, so that keeps us motivated, that there are people who are rooting and supporting us.”

She said “two weeks before the comp[etition], talagang kinondition ko na ang team physically and mentally kasi (I really conditioned my team physically and mentally since) we are aiming to rank and to win this competition kasi alam namin sobrang daming competitors na sasali all over Philippines and lahat magagaling (we knew that there are so many competitors coming from all over the Philippines and all are good).”

Knowing that there will be lots of competition, the kids worked even harder. She said: “it will not be easy for us, we will pass through the needle’s eye. This motivated us to train harder.”

Then they also found out that there will be competitors coming from Singapore, Taiwan and Malaysia “talagang nag focus kami sa training naming (so we trained even harder).

She added: “And we were overwhelmed with support from our families, their teachers, friends and those from the dancesport community in the Cordilleras.”

She said that as a result of the competition the kids are happy and are raring to join future competitions even if it is online.

She said: “Sobrang happy nang mga bata (the kids are really very happy) and I’m so proud of them also. We are taking a week of active rest before resuming training next week. We are preparing for an upcoming competition this April 11 and June 12.”