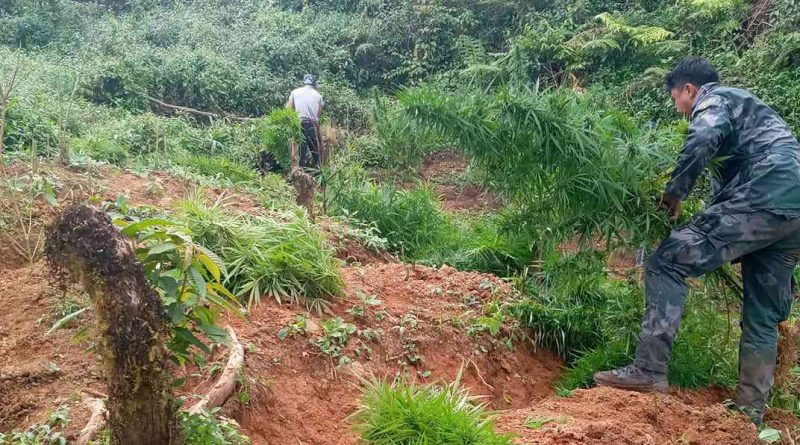 CAMP MAJOR BADO DANGWA, La Trinidad, Benguet – Once again, Benguet Police Provincial Office scored anew in the campaign against illegal drugs following the destruction of 712,000 Worth of Fully Grown Marijuana Plants (FGMJP)  in the hinterland of Bakun, Benguet over the weekend.

During the first day of eradication last Saturday, November 21, a total of 2,360 fully grown marijuana plants with an estimated worth of Php472,000 were uprooted in three different sites in Sitios Lepsik, Mabilig and Mantugali, all of Barangay Kayapa, Bakun, Benguet.

The following day of November 22, two more plantation sites were discovered planted with 1,200 FGMP with an estimated value of Php240,000 were uprooted in Sitio Pacda of Barangay Kayapa, Bakun Benguet.

All marijuana plants were burned onsite by the joint operatives of Bakun MPS, Benguet Provincial Intelligence Branch and Drug Enforcement Unit, and only representation were brought for evidentiary purposes.  Further, no cultivators were found, however, operatives are conducting further investigation to identify the owners and cultivators and appropriate charges will be filed against them in court.

The Police Regional Office Cordillera will continuously work with its counterparts in other government agencies to stop the marijuana cultivation regionwide.

The continuous eradication of marijuana plants is part of the continuing supply reduction effort of the government. PROCOR conduct more aggressive operations to totally get rid of marijuana cultivation regionwide especially in some barangays in Benguet. (PROCOR RPIO)

This post has already been read 4261 times!The city is looking for a private entity that is willing to partner