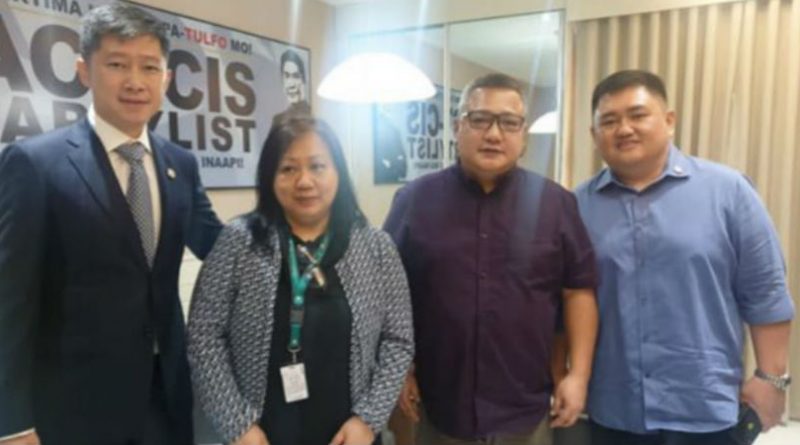 QUEZON CITY – The newly appointed legislative caretaker of Benguet Province assured the people and the officialdom of Benguet that transactions in the legislative district office based at the Provincial Capitol and in the House of Representatives will continue to operate to serve their clientele.

Anti-Crime Through Community Involvement and Support (ACT-CIS) Party-list Rep. Eric Go Yap, who was unanimously voted by the members of the House as the legislative caretaker of Benguet, who met with Benguet Boardmember Nestor T. Fongwan, Jr and Marie Rose Fongwan-Kipes, Chief of Staff of the lone district of Benguet, assured the smooth operation of the aforesaid office, provided that, all correspondences will be addressed to the legislative caretaker.

The position for the lone district of Benguet was vacated following the untimely demise of the late Rep. Nestor B. Fongwan, Sr. who succumbed to a lingering illness on December 18, 2019.

Yap assured the Fongwan family that the bills initiated by the late congressman and all that he intended to accomplish will surely be given appropriate attention.

He further stated that he will vigorously commit his time for Benguet until the expiration of the present term or upon the election and qualification of whoever will replace the deceased lawmaker once the House of Representatives will decide to schedule a special election for such purpose.

Upon the resumption of the regular session of the House last Monday, House Speaker Allan Peter Cayetano manifested the vacancy of the office of the lone district of Benguet following the untimely demise of the older Fongwan and upon motion of Rep. Xavier Jesus Romualdo, Deputy Majority Leader, Congressman Yap, the third nominee of the said party-list group, was unanimously voted to serve as the legislative caretaker of Benguet.