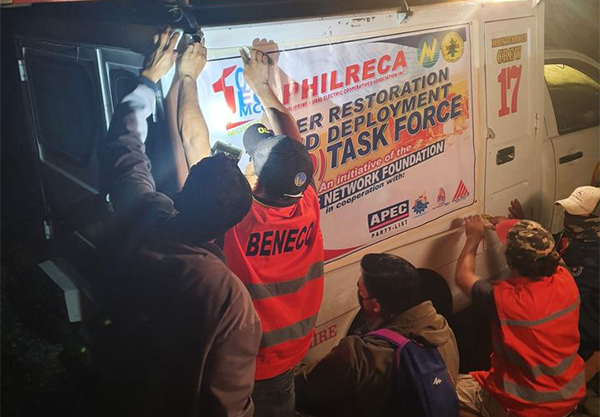 BAGUIO CITY – A 17-man contingent from the Benguet Electric Cooperative (BENECO) and the Mountain Province Electric Cooperative (MOPRECO) was recently dispatched to proceed to ground zero in the heavily devastated Catanduanes to help in the immediate restoration of power in the province which was earlier ravaged by Typhoon Rolly over the weekend.

BENECO General Manager Engr. Melchor S. Licoben said that the contingent is composed of 14 linemen from the Baguio-based rural electric cooperative and 3 personnel from MOPRECO that left the city early Friday morning to proceed to their destination initially in Virac, Catanduanes for their expected challenging work.

He disclosed that the contingent is fully equipped as the well-trained linemen brought with them one of BENECO’s latest acquired trucks, 4 utility vehicles, other important units of equipment and protective gears for them to be able to help in immediately restoring the power to the hardest hit province.

Licoben stated that the contingent will be in ground zero for a month with the hope that they will be able to efficiently perform their duties and responsibilities that will result to the restoration of power in the typhoon-stricken locality for the residents to also recover from the wrath of the strongest weather disturbance that visited the country this year.

Earlier, the National Electrification Administration (NEA) and the Philippine Rural Electric Cooperatives Association (PHILRECA) activated the Power Restoration Rapid Deployment (PRRD) Task Force through the active participation of the different electric cooperatives in the different parts of the country to help the calamity-stricken areas in the Bicol region in the immediate restoration of their power supply after the same was heavily devastated by the onslaught of Typhoon Rolly over the weekend.

Licoben added that the deployment of the contingent to help in restoring power in the calamity-stricken areas is part of BENECO’s corporate social responsibility to help other electric cooperatives that had been affected by calamities for the normalization of the power supply in the affected areas.

In 2013, BENECO linemen also extended their services to the various areas in Eastern Visayas that were ravaged by Super typhoon Yolanda for the restoration of the power supply as they worked double time to put up the fallen poles and power lines.

Licoben claimed that the contingent also brought with them substantial food supply for the period that they will be working in ground zero for them not to be an added burden to the concerned government agencies and local governments providing relief assistance to the affected residents.

Previously, the NEA and PHILRECA had been commending BENECO for being an active members of the Task Force Kapatid and for fielding seasoned linemen who were instrumental in the immediate restoration of the power facilities of other electric cooperatives in the various parts of the country that were earlier damaged by weather disturbances that visited the country over the past several years. By HENT

This post has already been read 681 times!LA TRINIDAD, Benguet –  Benguet Caretaker Congressman and Anti-Crime and Terrorism through Community