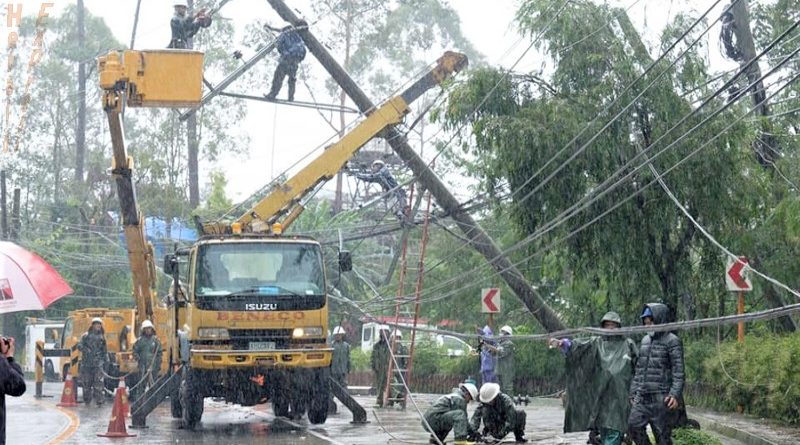 BAGUIO CITY – The prevalence of over three weeks of continuous rains caused by Typhoon Fabian and aggravated by the enhanced southwest monsoon inflicted over P10.5 million worth of damages to the power distribution system of the Benguet Electric Cooperative (BENECO), one of the country’s top performing electric cooperatives.

BENECO Network Services Department Manager Engr. Ramel Rifani disclosed that the monsoon-related damages were inflicted on the electric cooperative’s substation equipment, poles and transmission lines and transformers that caused unscheduled power interruptions in most of the areas within the cooperative’s franchise area.

He disclosed that of the total amount of damages to BENECO’s power distribution system, fallen poles and transmission lines incurred the biggest damage amounting to over P3.4 million while the existing substation equipment also incurred over P3.4 million and similar damage was also suffered by the transformers.

The BENECO official claimed that there were a total of 42 electric posts and 20 transformers that were downed during the prevalence of the continuous rains triggered by the weather disturbance and aggravated by the over 3 weeks of monsoon rains.

Rifani revealed that as of August 9, 2021, BENECO was able to restore power to all of the areas within the franchise area that experienced power outages during the onslaught of the monsoon rains.

According to him, BENECO will be forwarding a comprehensive report on the damages incurred by the electric cooperative, especially on its power distribution system, to the National electrification Administration (NEA) and the National Disaster Risk Reduction and Management Council (NDRRMC) for the provision of the appropriate subsidy to the electric cooperative to recover part of the expenses that were used in addressing the damages inflicted by the weather disturbance.

He explained that BENECO’s maintenance crew had been working round the clock during the height of the monsoon rains to attend to the complaints of the consumers on the power interruptions that had been experienced in various places within the cooperative’s franchise area to ensure the steady supply of quality power.

However, he admitted that there were some instances when power in some places were not immediately restored because of certain factors beyond their control, thus, they waited for the prevailing situation to calm down before bringing back the power to avoid the occurrence of untoward incidents that may pose threat to life and limb.

Rifani appealed to the member-consumer-owners for their utmost understanding when their steady supply of power can not be immediately restored because of the numerous reports on unscheduled power interruptions that had to be given appropriate attention by the assigned maintenance crew aside from the fact that there is a need to assess the overall situation in the said areas to ascertain the cause of the interruptions before actions will be taken to restore the same.

BENECO is one of the few Class AAA rural electric cooperatives operating in the country and it is also one of the cooperatives that charge the cheapest power rates from its increasing number of member-consumer-owners compared to private distribution utilities despite being a cooperative.

Rifani stipulated that the cooperative’s maintenance crew are always on alert, especially during the rainy season, to be able to effectively and efficiently respond to complaints from the consumers on the occurrence of unscheduled power interruptions that may have a significant effect on the operation of businesses within the franchise area to help in the gradual and safe recovery of the local economy. By HENT

5       5SharesThis post has already been read 4404 times!The city is looking for a private entity that is willing to partner