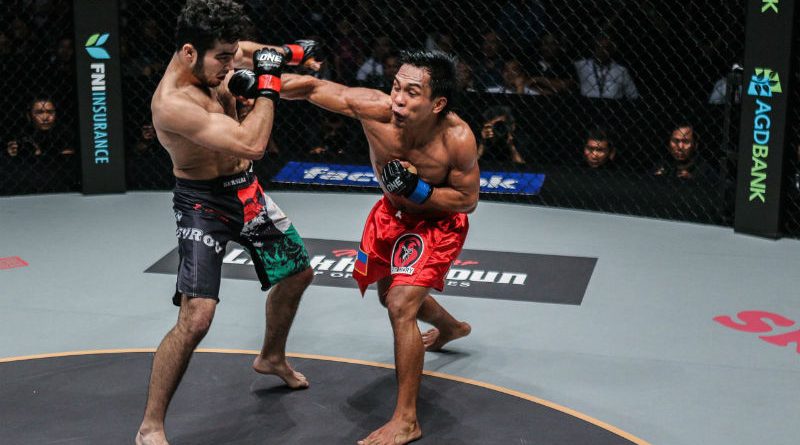 For the past four outings of Kevin “The Silencer” Belingon inside the ONE Championship cage, the Filipino knockout artist has proven himself as the next worthy contender for the coveted ONE Bantamweight World Championship.

However, Belingon is having a slight detour towards his goal to meet division kingpin Bibiano Fernandes in a rematch as he has been booked to duke it out with American veteran Andrew Leone.

Both men are slated to face each other in a three-round bantamweight affair in the main event of ONE: HEROES OF HONOR, which takes place at the 20,000-seater SM Mall of Asia Arena in Manila, Philippines on 20 April.

“I will be back in action again this April. I am excited because the bout will be held in Manila. It favors me because it is always a delightful experience to perform in front of my countrymen at the Mall of Asia Arena,” Belingon said.

Many cageside pundits believe that Belingon did enough to earn a date with Fernandes, who successfully defended his gold-plated strap against two-division world champ Martin Nguyen by way of split decision last 24 March.

Ever since yielding to Fernandes in January 2016, Belingon has run through his recent opposition by piling up four-straight stellar victories.

“Like any other martial artist in this promotion, my goal is to become world champion. I was given a shot at the title a few years ago, but I fell short against Bibiano Fernandes. I want another shot at the title. I have been working very hard to make sure I keep winning,” Belingon stated.

Belingon hails from the acclaimed Team Lakay in Baguio City, which has produced its fair share of world champions such as Eduard Folayang, Honorio Banario and Geje Eustaquio.

With his feared Wushu striking, Belingon plans on booking a second crack at the ONE Bantamweight World Championship with a victory over Leone.

“I am coming for that belt, and no one can stop me. Whoever they put in front of me, I will be looking to destroy. I am a man on a mission. I want to show everybody that I am the real title challenger-in-waiting,” he declared.

However, it will not be an easy task for Belingon as Leone is poised to take the Filipino’s stature as the rightful contender to vie for the coveted world title.

The 28-year-old native of Cortland, New York is no stranger to Fernandes as he once shared the ONE Championship cage with the Brazilian champion in August 2017.

Leone is similarly looking to secure another world championship opportunity after bowing down to Fernandes via first-round submission.

Belingon revealed that his main objective at ONE: HEROES OF HONOR is to keep his status as the No. 1-ranked bantamweight contender in the organization.

“I know what’s at stake here, and I know I have to beat Andrew Leone to get another shot at the title. I have to continue to give fans what they want and to leave nothing to chance. The title is within reach. I will beat Andrew Leone, and continue my march towards the belt,” he stressed.

Despite winning his three assignments in 2017, Belingon seeks to be more impressive this time around as he takes on Leone, who is a black belt in Brazilian Jiu-Jitsu and a highly-decorated wrestler.

Although he expects Leone to fully utilize his upper hand in the grappling department, Belingon is not worried as he made it a priority to concentrate on improving his wrestling and Jiu-Jitsu.

“After working on my wrestling and grappling over the past couple of years, I have really improved. Because of this improved grappling, my striking can be showcased even more,” he explained.

Belingon bared that he has watched Leone’s encounter with Fernandes and is confident that he possesses the power to finish the American standout.

“Andrew is a tough fighter, and I think his strength is on the ground. I will not hesitate to grapple with him. However, if he wants to stand and bang with me, I won’t hesitate to strike with him. I have the better chance of finishing the bout in the stand-up,” he warned.

Even though competing for the ONE Bantamweight World Championship title remains as his top priority, Belingon clarified that his current focus is fixed on his cage clash with Leone at ONE: HEROES OF HONOR.

“My opponent is not easy, and I am not taking him for granted, which is why I am completely focused on my upcoming bout this April 20. I need to be at my absolute best, so I can turn in another great performance for the fans,” he conveyed.

The stakes are incredibly high for Belingon, unveiling that he is preparing himself to be in the best shape of his life.

Belingon knows that each win from here on out is another step closer to the ONE Bantamweight World Championship belt.

“I know I will meet Bibiano again in that cage. There is not a day that has passed that I have not thought about that first bout against him. I am ready to face the champion. I am ready, more than ever. But for now, my goal to win and defeat Andrew Leone. I want to keep my dream alive,” he concluded.