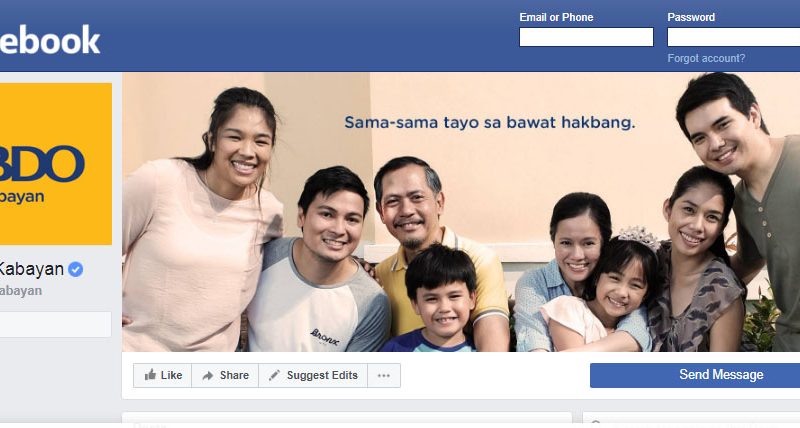 BDO Unibank was conferred with the Best Retail Social-Media Banking Experience award by Hong Kong-based financial publication The Asset during the Asset Triple A Digital Awards 2017, a recognition the bank has received for the third straight year.

The prestigious award was anchored on the Bank’s “Kabayan Initiative,” a plan aimed at establishing an interactive communication channel with its Kabayan clients—composed of Overseas Filipinos (including seafarers) and their respective beneficiaries—through social media.

The Sy-owned universal bank currently has multiple digital touchpoints by which clients can utilize to communicate or transact with the bank. Among these include online banking, mobile banking, and electronic banking channels, as well as a dedicated website and an official Facebook account.

For Facebook in particular, BDO has actively used this platform as a digital marketing channel wherein clients can access information about the bank’s products, services, current promos, and other finance-related topics.

BDO launched its official Facebook page in 2014 to provide an avenue for current and potential clients to give their feedback about the bank, and for BDO to gather such information to further improve its products and services.

In less than a year after its launch, the BDO Facebook page caught up with the Facebook pages of other banks and soon became number 1 in terms of total number of followers and engagements, registering more than one million followers by end-2015.

To date, the BDO Facebook has around 3.3 million followers.

Soon thereafter, BDO launched the BDO Kabayan Facebook page to address a large market segment which was underserved at that time in terms of digital servicing—the Overseas Filipinos. Through the BDO Kabayan Facebok page, the bank was able to get in touch with its Kabayan account holders in different parts of the globe in a more targeted and customized manner.