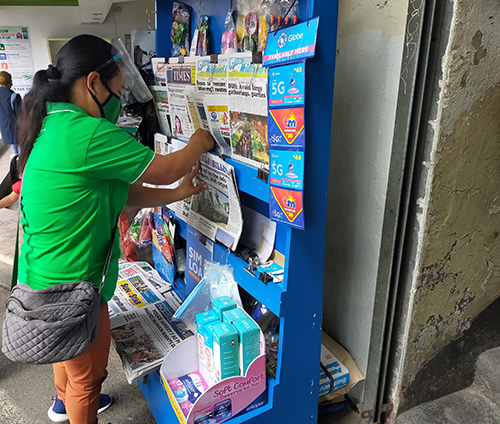 BAGUIO CITY – The Baguio Correspondents and Broadcasters Club (BCBC) recently slammed the ongoing efforts of the city government to rid out the newspaper stands along sidewalks in the city purportedly pursuant to the marching orders of President Rodrigo R. Duterte on government’s anti-road obstruction (ARO) campaign, saying that the newspaper vendors should not be treated as eye sores on the streets as they are also helping revive the local economy in a way amidst the prevailing Coronavirus Disease 2019 (COVID-19) pandemic.

In a statement, the BCBC, the umbrella organization of media groups in the city, stated that the newspaper vendors managing established newspaper stands around the city also contribute in the delivery of news and information to the people by making available various national and local publications in their stands for easy access by the reading public.

“Like journalists who had been struggling to make a living by pitching news articles for publication but earning less, small news stand owners and vendors are always on the streets for many hours thereby exposing themselves to the threat of the deadly virus and they earn their daily income from the commissions depending on how many copies of newspapers are sold to the reading public,” the BCBC statement stressed.

The BCBC emphasized as responsible citizens, the newspaper stand owners and vendors also pay for the issuance of their permits to sell and that they had been religious about it through the years where they have to pool some amount from their meager income to be able to secure such permit from the local government.

Contrary to previous assertions by the City Permits and Licensing Division that newsstands are alleged obstructions, the BCBC pointed out that the same are not even considered as obstructions of pedestrian traffic along sidewalks as they comply with the prescribed policies as agreed between them and the city government since the implementation of the anti-road obstruction right at the start of the term of the President in 2016.

According to what had been previously agreed upon, the group stipulated that vendors made sure that their newsstands have been rested against the wall of existing structures along sidewalks or in front of establishments where they are allowed to sell daily and weekly newspapers.

“It is sad to hear that the newsstands and vendors are given up to December 20, 2020 to clear the sidewalks. Obviously, it will be too difficult for them to talk to the owners of business establishments to allow them to sell inside their establishments to allow them to sell newspapers inside their businesses as the same will be awkward and unsightly for the owners,” the BCBC stated.

While there will be some business owners who will agree with the aforesaid proposition, the BCBC asserted that news stand owners and vendors will surely pay higher rentals for the spaces they will be allowed to occupy that will surely result to the reduction in their projected daily income as the same is based on their sales and that again, they will carry the burden of having to shell out from their commission the payment of the increased rentals that will cause most of them to eventually stop selling newspapers that will translate to the deprivation of the public on the information that will be derived to generate public opinion on pressing issues besetting the city and the country.

Moreover, for the past several decades, newspaper vendors have proven to be essential to the smooth flow of information to the public, thus, they should not be treated as eye sores but instead, they should be treated with utmost compassion.

As part of the process, the city government will be scheduling a dialogue between the newsstand owners and vendors and other concerned stakeholders on Tuesday, December 15, 2020 to discuss pressing issues and concerns on the said matter and for the determination of the appropriate solution to the problem and to ensure the continuity of the operation of the said stands along major sidewalks in the city.

This post has already been read 2563 times!The city identified some twelve priority investment areas that are expected to contribute in efforts