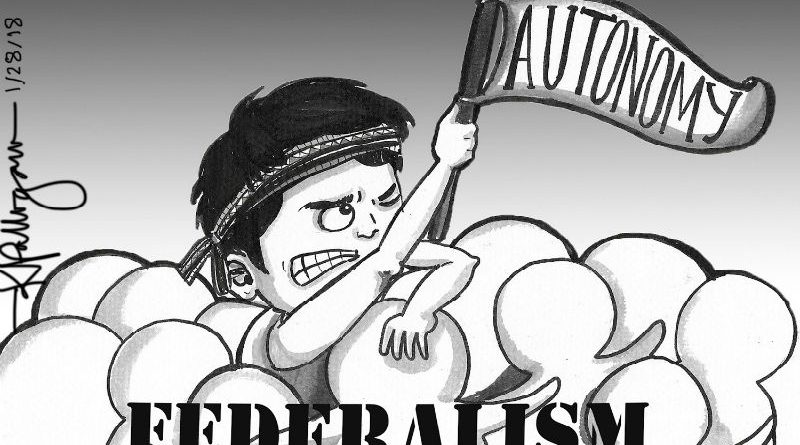 TABUK CITY, KALINGA  – Officials last week said that the Bangsamoro Basic Law (BBL) shall be passed and Cordillera autonomy shall be realized first before the country shifts from the existing unitary form to federal form of government.

Representative Allen Jesse Mangaoang said that Congress is considering an autonomous Cordillera under a federal government.

“Binitawan mismo ni Speaker Alvarez that BBL first, autonomy for Cordillera first before Federalism. So ‘yun ang thrust ngayon. So, it could be an autonomy within a federalist form of government,” the lawmaker said.

Roque and Mangaoang were speaking at a press conference during the celebration of the 23rd Kalinga Foundation day and 2nd Bodong Festival on February 13.

Mangaoang said that House Bill 5343 also known as “An Act Establishing the Autonomous Region of the Cordillera (ARC)” is currently at the committee level in Congress and that the same version was filed at the Senate by Senator Miguel Zubiri.

Governor Jocel Baac, for his part, expressed his confidence on the words of President Duterte.

“In as much that the BBL is really working, it follows. Because it is the promise of the leadership that should there be any move to approve BBL, kasama yung autonomy for the Cordilleras. So magandang significance na at least mapapasama tayo as a provision of the Constitution that there shall be autonomous region in the Muslim Mindanao and so with the Cordillera region,” the local chief executive said.

Autonomy lobbyists are in a race to pass House Bill 4353 before the shift to Federalism lest the Cordillera region is integrated into a proposed North Luzon state with Regions 1 and 2. The 1987 Constitution mandates the creation of autonomous regions in the Cordillera and Muslim Mindanao, a provision that may no longer exist the moment the Constitution is amended.