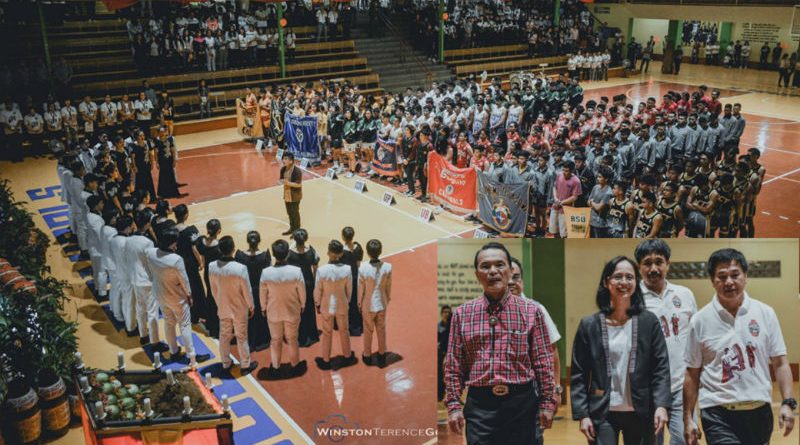 Student-athletes from participating schools trooped to the  the Cordillera Career Development College (CCDC) to formally open hostilities of the 2019-20 Season of the Baguio-Benguet Educational Athletic League (BBEAL).

The parade and opening ceremonies was held last Friday, October 4, at the Tupay-ya Complex in Buyagan, La Trinidad, home for the CCDC Admirals, this year’s host.

This year’s ceremonies were graced by CCDC Chairman of the Board James M. Malaya, Samahang Basketbol ng Pilipinas Regional Director for Northern Luzon Peter Rey Bautista, and Benguet Governor Melchor Diclas, who was represented by Provincial Executive Assistant Cayat, among others.

The event was highlighted by presentation from the Cordillera Regional Science High School Glee Club, which bagged gold during the 9th Bali International Choir Festival in Indonesia. They are set to compete once again to defend their title in Singapore.

CCDC cagers Nicholas Peter Sarris led the oath of sportsmanship alongside John Russel Tuazon who proceeded with the torch lighting which symbolizes unity and friendship.

The participating teams are down to 10 with the leave of absence of the King’s College of the Philippines due to the inability to field players.

Further, the University of the Philippines-Baguio Maroons begged off from the basketball competitions, lowering the field to nine teams, which will play a round-robin format.

The hosts got off to a hot start as they defeated Eagles 92-72 on October 5 and the Cavaliers on October 6.

The Atoms also got a back-to-back victory start by thrashing the Wild Cats in their first game, 101 – 85, and followed it up with a 77-62 win over the Eagles.

Meanwhile, Bautista encouraged the inclusion of 3×3 basketball tournaments in the BBEAL.  He emphasized that small schools can beat the big schools in this sport.

3×3 tournaments is a basketball competition that requires a team composed of four players, three taking the court with fourth one on the bench. 3×3 tournaments are currently popularized by a certain chicken food company which sponsors tournaments in the Philippines.

The sport has already been considered an Olympic sport for the upcoming 2020 Tokyo Olympics. The Philippines has a good shot of fielding as team because it currently ranks 21st all over the world. The top 24 countries in the rankings at cut-off time, set on November 1, will compose the competing teams.