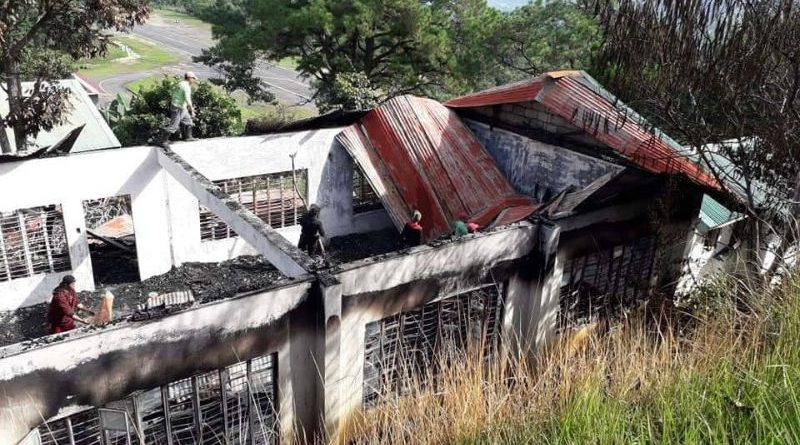 Mayor Frenzel Ayong said the reconstruction of the burned schoolbuilding will formally start on August 27, 2019 with the management of the Lepanto Consolidated Mining Company (LCMC) and the local government agreeing to shoulder the cost of labor and materials for the put up of a replacement of the burned structure to prevent unnecessary delays in the classes of the students using the said building.

The burned structure of the Lepanto National High School is a single storey 3-classrom schoolbuilding then occupied by 3 sections of Grade 7 students but who now temporarily holding classes in the LCMC training center while awaiting the reconstruction of the said building.

After the one-hour fire that ravaged the schoolbuilding, Mayor Ayong appealed to concerned sectors in the municipality to reconstruct the same to ensure the continued education of students from the different parts of the municipality.

Heeding the call of the local chief executive, some 115 small-scale miners from the different parts of the town helped in clearing and cleaning the debris including the heavily damaged ceiling, roofing and broken windows, as well as the steel windows.

The town’s small-scale miners group is headed by their president, Manasseh Gilles, who brought with them their tools and even went to the extent of hiring 3 dump trucks to haul out the waste materials from the site.

Further, the pocket miners also butchered two native pigs for their lunch so as not to burden anyone in having to prepare food for them.

The single storey 3-classroom building of the Lepanto National High School was named Cosalan building as it was funded and constructed sometime in 1998 during the incumbency of former Benguet Rep. Ronald M. Cosalan.

Mayor Ayong expressed his sincerest gratitude to the concerned sectors of the locality, particularly the small-scale miner’s group, for their immediate assistance in the clearing the debris from the site and for their commitment to help rebuild the structure to ensure the students have a decent space for their daily learning activities.

He asserted the officialdom of the municipality is lucky the ‘bayanihan’ spirit among its constituents from the different barangays and sectors is still very much alive thus issues and problems can easily be effectively and efficiently addressed because of the enormous assistance from kind-hearted individuals and groups.