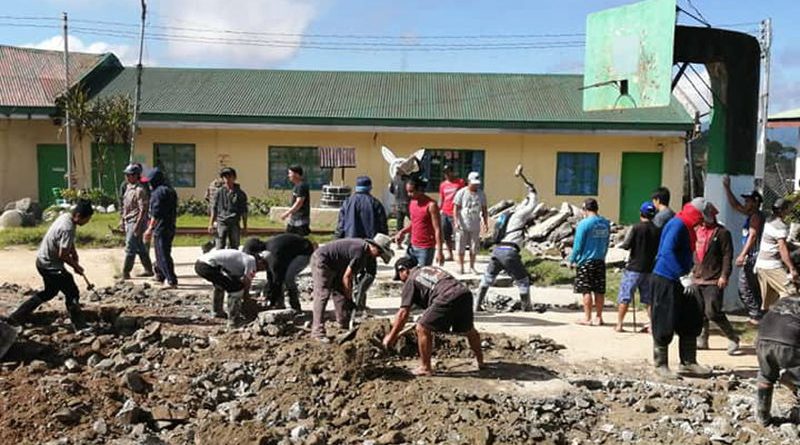 MANKAYAN, Benguet – ‘Bayanihan,’an age-old Filipino tradition has been very much alive among the people living in the different parts of the municipality, especially during times of need.

The municipal government recently commended some 200 pocket miners from different associations in the municipality for their unrelenting and uncompromising effort to help individuals and institutions that are in need of help, the latest of which was the Bulalacao National High School.

Mayor Frenzel Ayong said one of the classrooms of the public school was heavily damaged by a soil erosion during the prevalence of continuous rains last month that prompted school officials to seek help for the immediate clearing of the debris to ensure the safety of students attending regular classes.

Initially, the municipal government, barangay officials, Parents-Teachers and Community Association (PTCA) officials and personnel of the Mankayan Municipal Police Station and the Benguet Mobile Force Company based in Camp Dennis Molintas in Buguias town helped in conducting the clearing operations.

Last Tuesday, some 200 pocket miners joined forces and brought with them their units of equipment and trucks to be able to clear the schoolbuilding and classrooms of the debris that have heavily damaged the same and contributed in the unnecessary interruption of classes of the students.

Ayong emphasized that the voluntary work rendered by the pocket miners in clearing the school from the debris only shows their commitment to the supposed uninterrupted studies of the students because they believe that education is still the best inheritance that will be given by parents to their children because it cannot be easily taken away from them.

It can be recalled that the pocket miners also played a key role in clearing the debris that was left by the fire that ravaged one of the buildings of the Lepanto National High School over a month ago.

The local chief executive asserted that the contribution of the pocket miners in the different civic activities in the municipality is worthy of emulation because they are always ready to render voluntary service whenever they are called to do so and that there is no need to remind them to do so when the need arises.

He expressed his sincerest gratitude to the different pocket mining associations and the different government and civic organizations in the municipality that shoed their commitment in responding to emergency situations that are caused by either natural or man-made calamities considering that they value saving lives and properties that are exposed to eminent danger.

He urged the different sectors in the municipality to continue strengthening the bond that had been established over the past several months so that they will be able to cater to the emergency needs of people who are exposed to danger as a result of the wrath of man-made and natural calamities that pose a serious threat to life and limb.

By HENT
‘BAYANIHAN SPIRIT’ALIVE – Some 200 pocket miners belonging to different associations in Mankayan help in the clearing of the classroom of the Bulalacao National High School that was a buried by a recent landslide upon the appeal of Mayor Frenzel Ayong and upon the initiative of Manaseh Gilles, head of the pocket miners. Photo courtesy of Team Ayong