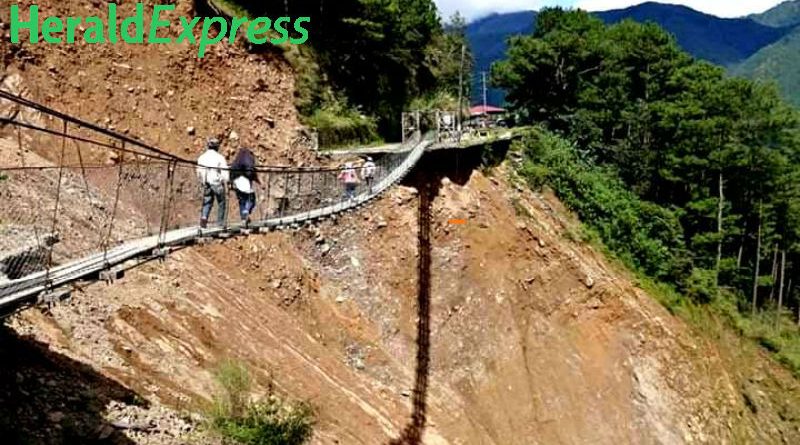 SABANGAN, Mountain Province– The ‘bayanihan’ spirit thrives among the people of this landlocked province as they were again able to prove that with the concerted effort of everyone, the supposed prolonged closure of the road cut in the Busa section of the Halsema Highway was abbreviated that partially ended the sufferings of motorists.

Last Wednesday, the Department of Public Works and Highways – First Mountain Province District Engineering Office (DPWH-FMPDEO) declared that the Busa section of the Halsema Highway was opened to light vehicles with a grow weight of 2 tons considering that what was set up was a temporary bailey ridge to allow motorists to pass through the road cut and reach their desired destinations the soonest.

DPWH-FMPDEO District Engineer Alexander Castañeda said that the putting up of the temporary bailey bridge was through the efforts of the Sabangan Municipal Government, the Mountain Province Government, the DPWH-CAR and other district offices as well as the Department of Environment and Natural Resources (DENR), Philippine National Police (PNP) and the Bureau of Fire Protection (BFP).

“We are grateful to Sabangan Mayor Marcial Lawilao, Jr. for his passion in pressuring concerned government agencies to pool their resources to at least open the road through the put up of bailey bridge for light vehicles to waste the prolonged sufferings of the people of the province in having to go round a longer route just to reach their desired destinations inside and outside the province,” Castañeda stressed.

He added that the bailey panels and bridge decks were borrowed from the Benguet and Ifugao district offices of the agency while part of the labor for the put up of the same on the road cut was shared by the Sabangan Municipal Government, the DPWH and the provincial government.

For his part, Mayor Lawilao asserted that his persistence in trying to lobby for the put up of a temporary bailey bridge on the road cut was brought about by the numerous complaints from the people in the different parts of the province who had been suffering the difficulties of having to go around the province just to reach their desired destinations thereby having a negative impact on their work and their studies.

Around 6 bailey panels and bridge decks were installed to cover the 6-meter road cut to connect the two portions of the road in Busa that was ravaged by the wrath of Super Typhoon Ompong on September 15, 2018 and was aggravated by the succeeding weather disturbances that prevailed in Northern Luzon for over a year now.

Lawilao claimed that there was no much of public funds that was used in the put up of the bailey bridge because most of the materials that were used were provided by the concerned government agencies that allowed the same to be temporarily used just to help in easing the burden of the residents and visitors wanting to go around the province.

He urged the motoring public to cooperate with the existing policy that the bailey bridge will be opened to light vehicles with gross weight of 2 tons of to ensure their safety and prevent the occurrence of untoward incidents that could pose serious three to life and limb and ensure the continuous smooth flow of traffic in the main road.