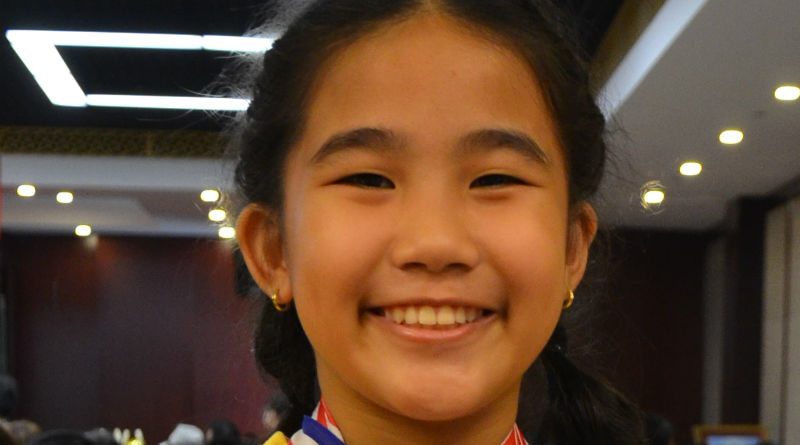 One of the major contributor of these medals was Andrea Zyrene Palisoc from BHC Educational Institution Incorporated in Sevilla Center, San Fernando City, La Union.

The young lass from Pagdalagan Sur, Bauang, La Union brought home four medals, a gold in the group relay race, a silver in the individual calculation and a bronze each in the individual comprehensive/problem solving and group overall in the grade four competitions.

To qualify for the competitions, the incoming grade five pupil of the BHC Educational Institution Incorporated, one of the centers of Mathematics Trainer’s Guild of the Philippines (MTGPhils), undertook a rigorous pre-qualifying exam and a 12-Saturday training in the MTG center, after which she passed a 4 day rigorous mental workout called young mathematicians intensive in-house training program (YMIITP), conducted in Tagaytay last April 7 to 10.

When she hurdled this phase, she went on a one month Mathematical Olympiad Summer Training Program (MOSTP) training in Manila from April 17 to May 19 to be assigned as one of the kid participants in the World Olympiad.

Proud mother Leynaly Palisoc, working as a Senior Area Manager of a company in Agoo, La Union, said she advised her child to “Always enjoy and love what you love and enjoy to do, give all your best in achieving your hearts desires, couple it with lots of prayers to God for guidance, and be thankful always on whatever blessings that may come your way.”

The China Olympiad was the younger Palisoc’s third participation in an international competition.

She first brought home bronze from the World Mathematics Invitational (WMI) held in Guilin, China when she was a second grader.

Last year, she brought home two bronzes from the individual and group relay; and a 4th place in the overall team category in the China Primary Mathematics Olympiad/Enjoy Mathematics Summer Camp also held in Hangzhou, China.

Locally, she also joined the National Parallel Challenge for Future Mathematicians (NPCFM) and garnered a bronze last 2015, and a silver last year.

Recently, she was one of the awardees of one of the toughest written assessments in Math, the 6th International Mathematics Assessments for Schools (IMAS).
Palisoc is also one of the brightest and most behaved students of her school, being a consistent first honor student of her class since grade 1 and a recipient of the best conduct award.

She is an active leader student in their school organization, the Supreme Pupil Government where she was elected as their grade level representative last year and the treasurer this year.

Her exploits did not escape the eyes of the Department Of Science and Technology (DOST) as she was bestowed a DOST youth in excellence in science award in 2015 and 2016.

She is also into sudoku and is a hopeful qualifier for the nationals this year.