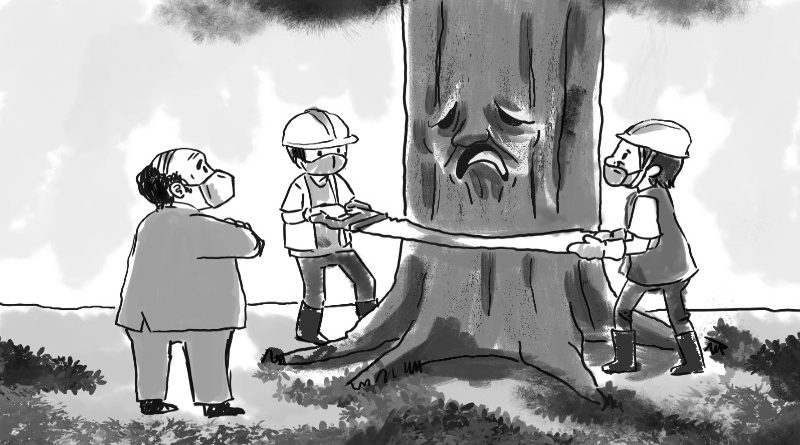 Baguio City and most parts of the Cordillera are the natural homes of pine trees most of which are growing in our forests. In the city, we see these in parks which are now the lungs of the city. It is no wonder that people are outraged when there cuttings of trees, especially of pine trees which have been part of the identity of the city since it was founded as a city. Trees sequester carbon that are emitted into the air and replace them with oxygen. This strikes a balance in the environment to ensure good air quality for the health and safety of the human beings.

Indeed, the preservation and protection of the trees in public and private properties is the primordial concern of designated government agencies and local governments as trees play a key role in erosion control and the stability of potable water supply. Further, without trees government’s effort to stabilize the greenery of the denuded areas would be a failure.

Recently, the city government and the Cordillera office of the Department of Environment and Natural Resources, through the Community Environment and Natural Resources Office, had been engaged in an exchange of clarificatory statements on the issuance of tree-cutting permits for the cutting of trees in some areas around the city to pave the way for the implementation of various road widening projects funded by the national government. Truly, the DENR-CAR issued a tree-cutting permit for the cutting of some 31 trees within the vicinity of the Baguio General Hospital (BGH) rotunda, Camp 7, and other areas around the city. On the other hand, the city government clarified that it never issued clearance to the cutting of some 36 trees. Tree-cutting had been a sensitive issue among the government agencies, the local government, and concerned citizens.

There may be some misinformation in the recent BGH area tree-cutting issue that was further muddled by the failure of concerned government agencies and the local government to  come out with the right information on what trees are efficient in carbon sequestration had what trees are not doing good in cleaning the air from pollutants. It is high time that we inform and educate our people about the tree species that perform well in terms of carbon sequestration so that they will be the ones that will be propagated for distribution and to be used in regreening efforts to help in erosion control and clean the air from pollutants.

Aside from the right messaging that should be delivered to the people, government should start formulating guidelines governing the implementation of reforestation projects being implemented in the different parts of the region so that the programs will be striking two birds in one stone for us to be effective in our efforts to sustain the greenery of our mountains that had been denuded because of their conversion to commercial vegetable farms.

Let us start educating ourselves on the carbon sequestration of the different tree species so that we will not be barking at the wrong tree and for us not to be put to shame for not understanding what we are saying about the regreening programs of the concerned government agencies and the local government. So that we will be able to send the right message to the people. Let us not sow confusion among our people but let us learn to enlighten them through our appropriate advocacies for us to gain their trust and confidence.

Let us elevate our efforts to a higher level so that our people will be well informed of the realities in dealing with environmental preservation and protection programs. We should not stop studying the different facets of the environment so that we will be delivering the right information for our people to understand the real situation on the ground. We need the trees to sustain our daily living but we also need development to provide the adequate economic activities to provide jobs for our people and sources of livelihood that will help in improving the living condition of their families, thus, there is also a need to strike a balance between the environment and economy. Both should co-exist with each other because we need to survive the effects of the Corona Virus Disease 2019 (COVID-19) pandemic to our daily lives. Let us plant trees rather than confusion.