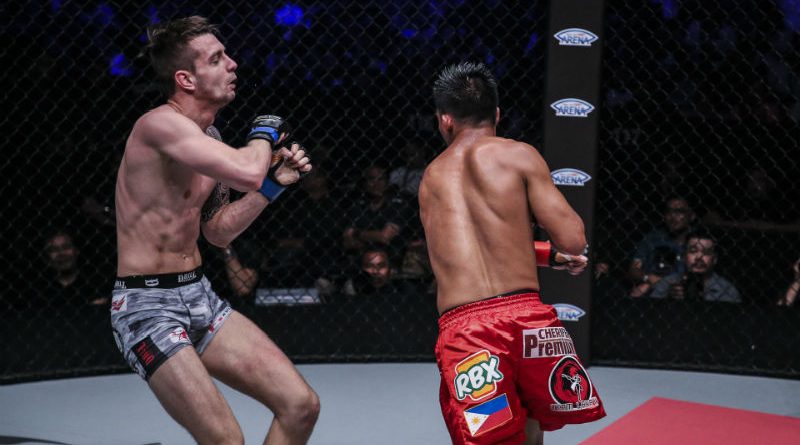 Honorio Banario turned in the second best knockout of the year in a ONE Championship cage. Fellow Cordilleran and Team Lakay Mainstay Edward Folayang’s loss to Martin Nguyen, however, was named as the top knockdown of 2017.

Here are ONE’s top five best knockouts of the year:

5. Anthony Engelen’s power right hook at ONE: QUEST FOR POWER

Engelen electrified his adopted home crowd of Jakarta, Indonesia his victory on the undercard of ONE: QUEST FOR POWER on January 14 with a masterful display of striking, defeating his opponent with one strong blow and bringing everyone up to their feet.

Just two minutes into the very first round against Malaysian martial arts veteran AJ “Pyro” Lias Mansor, Engelen put together a stunning boxing combination, punctuated by an emphatic right hook that connected right on the jaw of his cage counterpart, who was out cold before he even hit the ground.

ONE: QUEST FOR POWER – Anthony Engelen vs AJ Lias Mansor

This is Ja-KO-rta! The crowd goes wild for Dutch-Indonesian star Anthony Engelen!

Posted by ONE Championship on Saturday, January 14, 2017

4. Christian Lee’s spectacular slam at ONE: WARRIORS OF THE WORLD

The 19-year-old featherweight standout took another step in fulfilling his billing as the future of martial arts on December 9 as he concluded a masterful performance against former ONE Lightweight World Champion Kotetsu “No Face” Boku at ONE: WARRIORS OF THE WORLD in Bangkok, Thailand.

In perhaps his most impressive performance to date, “The Warrior” Lee brought his best against a dangerous opponent in Boku as he employed the perfect strategy and completed a rapturous knockout triumph that undoubtedly signals his readiness to challenge the upper tier of talent in the promotion’s most stacked division.

Moreover, Lee unloaded his best offense on the former world champion, all while pushing him constantly back up against the cage.

Just past the three-minute mark, Lee quickly took Boku’s back and executed a textbook trip takedown with such incredible power that it knocked Japanese veteran out.

The impressive win over Boku was Lee’s seventh first-round stoppage victory and tied the promotional record for most finishes at eight.

With an astounding victory, the young lion’s path to gold is becoming much clearer!TV: Check local listings for global broadcast | PPV: Official Livestream at oneppv.com

Posted by ONE Championship on Saturday, December 9, 2017

3. Zebaztian Kadestam’s comeback knockout win at ONE: DYNASTY OF HEROES

Going up against one of the most feared strikers in the division is not the most ideal scenario for a ONE Championship debutant, but Swede newcomer Zebaztian “The Bandit” Kadestam wouldn’t have had it any other way.

Receiving the opportunity to join ONE Championship and take on one of the biggest names in the division all worked out for Kadestam as he turned in one of the most exciting finishes in 2017 with a third-round knockout of Brazilian powerhouse Luis “Sapo” Santos at ONE: DYNASTY OF HEROES in Singapore on May 26.

Accepting the challenge on short notice, Kadestam spent the first two rounds fending off a furious offense by Santos.

Unknown to the Brazilian, it was all a part of Kadestam’s plan as Swede was biding his time, waiting for the third round where Santos has been known to lose his steam.

It was precisely what happened to the Brazilian brute, giving Kadestam a great opening to capitalize with a series of hard knees that flattened Santos to complete a shocking comeback upset.

'The Bandit' strikes hard in his ONE debut!Check your local listings for global broadcast or watch live at oneppv.com.

2. Honorio Banario’s one-punch knockout at ONE: KINGS OF DESTINY

On April 21, at ONE: KINGS OF DESTINY, Banario showcased another epic performance, stopping ONE Championship debutant Jaroslav Jartim with a single left hook.

Countering a body kick with a punching combination, Honorio unleashed a left hook that landed square on Jartim’s jaw, turning the lights out immediately for his Czech opponent.

It was Banario’s first real knockout victory since he stopped compatriot Andrew Benibe at ONE: PRIDE OF A NATION in August, 2012.

Ladies and gentlemen, this is a KO. ?Action continues at oneppv.com. Check your local listings for global broadcast.

1. Martin Nguyen’s history-making knockout at ONE: LEGENDS OF THE WORLD

Nguyen entered hostile territory last November 10 and sneaked in a brilliant overhand right to floor beloved Filipino martial arts superstar “Landslide” Folayang for the ONE Lightweight World Championship before a hometown crowd in Manila at ONE: LEGENDS OF THE WORLD.

As Folayang telegraphed his patented spinning back kick, Nguyen uncorked his famed overhand grenade to shock the world once again.

The jaw-dropping knockout of Folayang earned Nguyen a spot in the history books, becoming the first man to hold two world titles simultaneously in ONE Championship.

Nguyen catapulted to superstardom through a series of impressive highlight-reel finishes, culminating with his knockout of previously-unbeaten Marat Gafurov for the ONE Featherweight World Championship some three months before this fight.

With an unstoppable weapon in his vaunted overhand right, Nguyen emerged as a legitimate knockout artist who is capable of toppling anyone with a single shot.

Impossible is nothing for “The Situ-Asian” as he creates monum…

Impossible is nothing for “The Situ-Asian” as he makes monumental ONE history!

Posted by ONE Championship on Friday, November 10, 2017