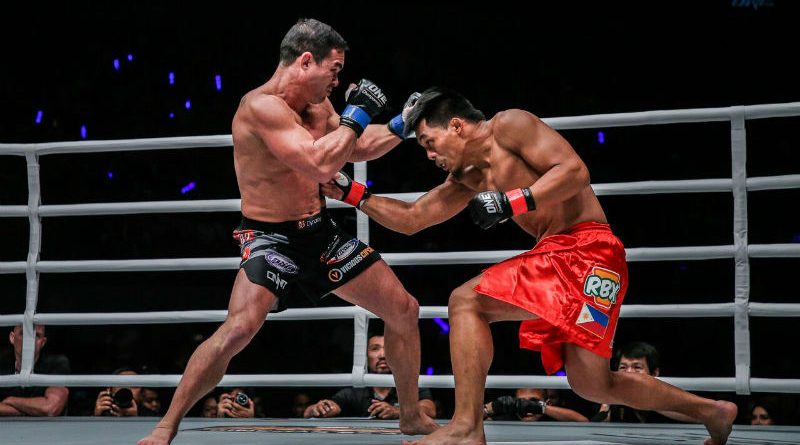 They say success is forged in the fires of defeat. For former ONE Featherweight World Champion Honorio “The Rock” Banario, his re-emergence as a top lightweight contender was sparked during the unlikeliest of times.

The Team Lakay veteran went on a five-bout skid between 2013 and 2015, and was on the verge of retirement when he decided to take a step away from competition to regain his bearings.

Coming back to the cage as a lightweight a year after, Banario looked like a new man.

“I have always believed in myself, but I was surprised to have done what I did,” said Banario, in an official interview with the ONE Championship website.

“With the help of my teammates, and the support of my friends and my family, I continued with my career and it was a good decision.”

Now, Banario is on an unprecedented five-bout win streak, defeating a handful of solid opponents, among those are Eddie Ng, Jaroslav Jartim, and top lightweight Adrian Pang.

With momentum on his side, Banario is closer than ever to a shot at the ONE Lightweight World Championship held currently by Martin Nguyen.

“Right now, I’m just motivated to keep on winning. Whether that means I’m on the road to another title shot or not,” said Banario.

“I just want to beat whoever they put in front of me. If that leads to the title, then I’m fine with it.”

Banario is set to return to action at ONE: BEYOND THE HORIZON, which takes place 8 September at the Baoshan Arena in Shanghai, China. He will face top lightweight Amir Khan of Singapore in a battle with serious title implications.

Khan, a former Muay Thai champion, is coming off a solid technical knockout victory over Korean Sung Jong Lee. He is known as a dangerous striker, capable of finishing contests quickly and efficiently behind his Muay Thai experience.

“Amir [Khan] is a hungry young lion and one of the top contenders at lightweight. He’s tall and long and uses his distance very well. It’s going to be a good challenge for me. If I can defeat him, I can gain more solid footing among the division’s best,” said Banario.

“I know he is a great striker, but I am also. It’s going to be Muay Thai versus wushu when we meet at the center of the ring.”

Khan, who represents Evolve MMA in Singapore has faced some of the toughest strikers in the promotion and has come away with 10 wins and just three defeats. But he has never faced a wushu stylist with equal amount of power.

Banario is also a former ONE Featherweight World Champion, and one of the pioneers of the renowned Team Lakay.

“They have a lot of world champions training at Evolve, the best facilities, access to knowledge from BJJ black belts, Muay Thai and wrestling world champions,” said Banario.

“We don’t have that at Team Lakay. We may not have the advanced facilities, or every resource at our disposal, but I don’t see it as a disadvantage. We have each other, and because we operate on very little, I think it makes us hungrier to prove that Team Lakay is world-class and one of the best teams in the world despite our limited resources.”

The 28-year-old’s reinvention as a lightweight has taken him on a wild five-bout win streak. He is now gunning for his sixth straight win and knocking on the door of a world title shot.

Just three years ago, no one would have envisioned Banario being in the position he is today.

If Banario can defeat an opponent of Khan’s caliber decisively, he will make an excellent case as the next in line to face Nguyen.

“I’m confident of victory. I know it won’t be easy but I know what it will take to win,” Banario concluded.

“He’s a worthy opponent, young and dangerous. I think my skills are good enough to beat him. The winner will move forward in the division in a big way and I’m looking to make a statement.”