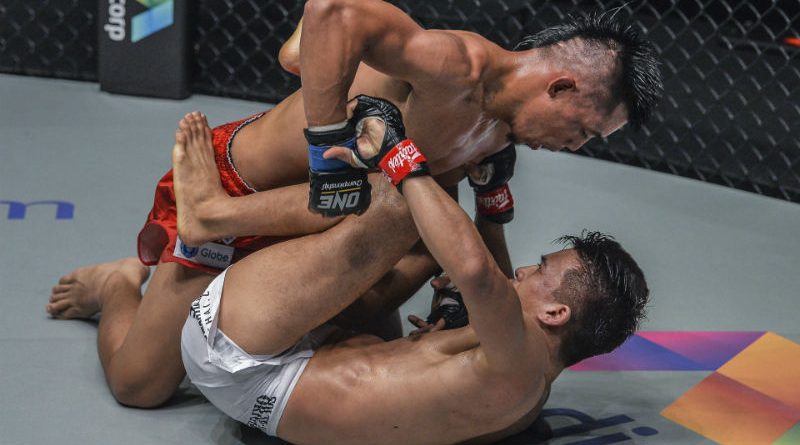 Honorio “The Rock” Banario announced his triumphant return in the Featherweight division, an arena he once ruled, by earning a masterful split decision win against Shannon “OneShin” Wiratchai at ONE: King of the Jungle held at the Singapore Indoor Stadium on February 28, 2020.

Faced with an opponent whose style he has probably seen a million times in sparring sessions, Banario doubled down Gina Iniong’s use of grappling to rely on takedowns and neutralize a vicious striking attack from his Thai opponent.

Banario simply knew what to do when Wiratchai came in armed kicks and punches that resembles those of Eduard Folayang, take the fight to the mat and let it stay there until the bell.

Even if it means he has to absorb some hits in the process, a strategy Team Lakay opponents used to pull victories in the past.

The first round opened exactly like that as Wiratchai was on the offensive, aggressively locating opening to sneak his kicks while flashing some spinning back fists.

Banario, meanwhile, keep various stances and was contented firing counter shots until Wiratchai caught his leg, absorbs a left knee to his temple, and a series of left and right hands.

The sequence, however, allowed Banario to get a body lock and successfully pinned Wiratchai against the fence of the cage.

It was all “The Rock” from that point till the end of the round.

Banario sprayed knees to Wiratchai’s legs while in the clench.

When the Thai was able free himself from the grab, Banario took him down on a spear and peppered him with more knees to the body until the bell sounded.

Banario again sacrificed absorbing a left kick in exchange of a leg grab that allowed him to pin Wiratchai once more to the fence that would result to his domination of the second round.

After delivering a few knees, Banario, with the aid of a trip, flipped the Judo Black Belter to the mat with 3:50 left in the round, maintained his balance to assume dominant position, and controlled the action with ground and pound until the end of the round.

Wiratchai started the final round again pushing forward aiming kicks and the spinning attacks at the former champion and was able to connect his first meaningful hits as Banario fails on a couple of takedown attempts.

Banario’s persistence finally paid off with 1:45 left as his leg grab sends Wiratchai back to the mat although the Thai was able to kick out and get the action back to their feet.

Banario’s movement was also on point, making a Wiratchai spinning backfist miss its target badly and allowing him to catch a left kick and turn it to another takedown, time down to 33 seconds.

Iniong earlier put a punctuation mark on Team Lakay fighters’ ability to utilize the ground game as she initiated the use grappling to dominate Asha “Knockout Queen” Roka during ONE: Fire & Fury held last January.