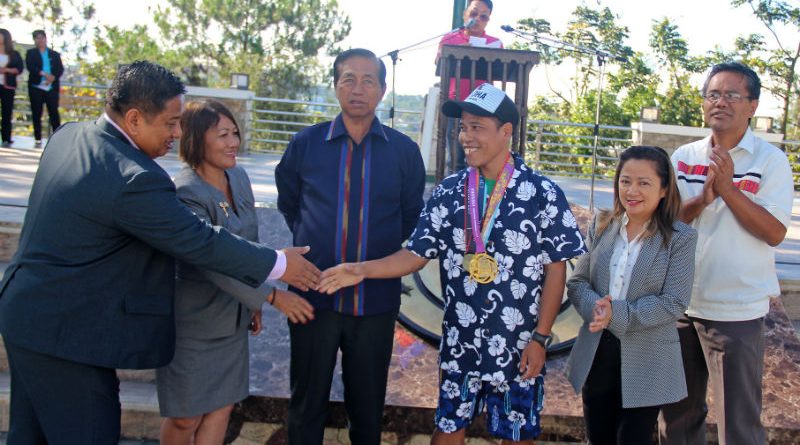 BAGUIO CITY – The city’s small but terrible “marathon man” has done it again.

Marcelo Bautista proudly brought home a medal from the 42 kilometer Honolulu, Hawaii Marathon held December 9, 2017 where hundreds of elite runners from around the world participated.  The feat qualifies him to join the famous Boston Marathon in the United States this October.

He was also a medalist at the prestigious Waikiki Marathon and Xterra World Championships also in Hawaii.

Bautista was recognized for his athletic triumphs  by local officials led by Mayor Mauricio Domogan last May 14’s flag-raising rites at City hall.

A resident of Mirador Hill barangay, the 37-year-old marathoner said he has been running for almost 20 years now and has amassed around 180 medals and 20 trophies from local, regional, national and international competitions  in his athletic career.

A family man, Bautista added that he was formerly a janitor at the Baguio General and Medical Center for several years and is now a full-time athlete.  He is thankful for the support given him by private benefactors and the city government.

He will also be returning to Hawaii in November to join this year’s edition of the Honolulu Marathon where he hopes to do even better.

Domogan said that Bautista’s  numerous achievements has not only brought honor to himself and his family but to the city as well.