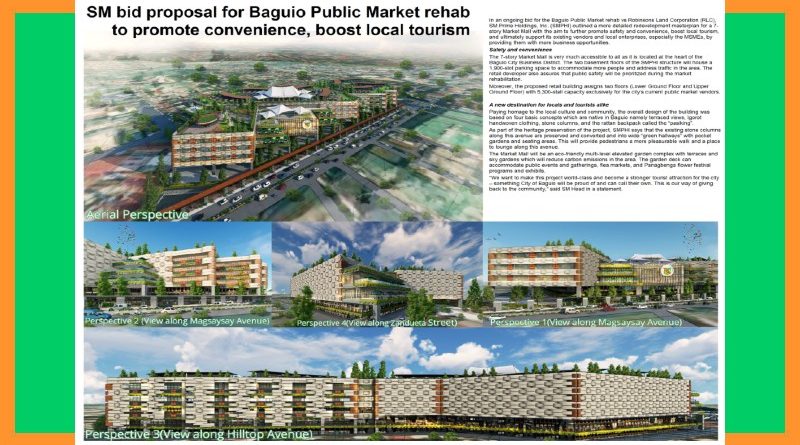 BAGUIO CITY – The ongoing negations between the members of the city’s Public-Private Partnership for the People Selection Committee (P4-SC) and their counterparts from SM Prime holdings could be possibly extended until such time that both parties will be able to reach a mutual agreement on the final terms of reference for the multi-billion project.

City Administrator Bonifacio dela Peña, stated that the 80-day period given for both parties to formulate the terms of reference for the project could be further extended to pave the way for the final terms of reference that will be subjected to the Swiss challenge by interested companies wanting to help the city develop the public market.

He disclosed that the scheduled February 2, 2021 meeting for the finalization of the technical and financial terms of reference was moved to February 8, 2021 to allow the concerned committees to come out with their proposed terms for the project.

Further, the final terms of reference will then be presented to the City Mayor on or before February 15, 2021 for his approval and once that the local chief executive will agree to the consolidated terms, the designated members of the negotiation teams of the city and the company given the Original Proponent Status (OPS) will start the formal negations that is supposed to run until March 31, 2021.

The city administrator stipulated that the earlier timetable that was prepared for the negotiations of the terms of reference for the market development project could change anytime depending on the outcome of the finalization of the terms and the formal negotiation period that is why appropriate adjustments could be done from time to time depending on the situation.

Under the original timetable, the public consultation for the final terms of reference for the market development project is scheduled on April 5-9, 2021 while the Swiss challenge to the company that was given the OPS is slated on April 16, 2021.

The proposed development of the city public market is one of the local government’s major flagship project to improve the status of the city’s show window and make it as one of the best market in the Southeast Asian region in the future once the same will be realized.

It can be recalled that the P4-SC warded the OPS for the market development project to Robinsons Land Corporation but the City Mayor, upon the recommendation of an independent committee that was created to review the committee’s decision, ordered the reversal of the same and awarded the OPS to SM Prime holdings.

Only Robinsons Land Corporation and SM prime holdings submitted their proposals for the market development project after the local government called for the submission of the aforesaid proposals to pursue the desired improvement of the market after the Supreme Court (SC) declared the constitutionality of the ordinance that prescribed the guidelines for the development of the public market and the validity of the derivative contract for the same.

This post has already been read 2611 times!The city identified some twelve priority investment areas that are expected to contribute in efforts