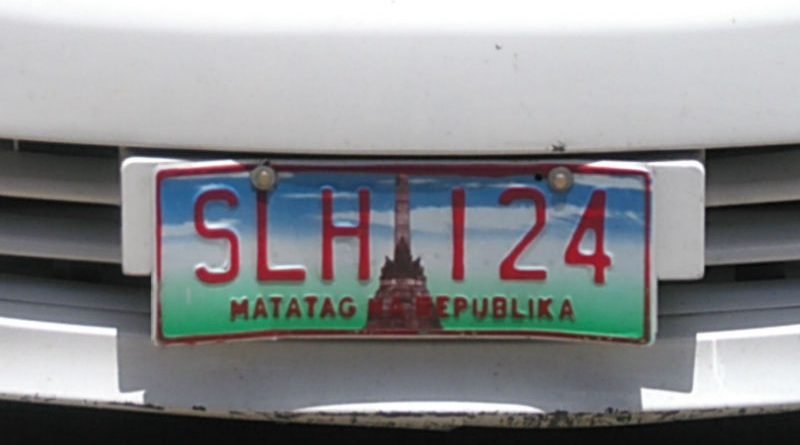 The city and the Cordillera office of the Land Transportation Office (LTO-CAR) will forge an agreement for the proper disposal of the increasing number of unclaimed license plate numbers of motor vehicles confiscated by police operatives and deputized personnel of the Public Order and Safety Division (POSD) and barangay officials.

LTO-CAR regional director Francis Ray Almora stated that the terms and conditions of this agreement are being finalized by both parties prior to the scheduling of its signing.

He pointed out that the formalization of the agreement is part of the overall efforts of the agency to strictly implement the policy on the no-detachment of license plates attached to motor vehicles as license plates are considered the private property of the owner and that it is also classified as permanently attached to the vehicle where it rightfully belongs.

Further, the LTO-CAR official added that the no-detachment of license plates is in line with the implementation of the government’s no-contact policy in preparation for the eventual shift to the use of the LTO management information system for the online registration of motor vehicles, application for issuance of driver’s license, among others.

Under the said agreement, the city, through the Baguio City Police Office–Traffic Enforcement Unit (BCPO-TEU), will be allowed to use the LTO management information system to tag and alarm the license of plate number of motor vehicles that have violations and whose owners shall be compelled to settle their obligations before being they can renew the registration of their vehicles.

Director ALmora explained that law enforcers will no longer be allowed to confiscate the license plate numbers of motor vehicles as the same are considered to be permanently attached as part of the private property of the vehicle owner.

Earlier, BCPO traffic officers sought the assistance of the LTO-CAR on how to appropriately dispose the license plate numbers of motor vehicles earlier confiscated due blatant violations of traffic rules and regulations as well as ordinances, which continue to pile up in their office as owners have refused to claim the same.

According to the LTO-CAR, the previously confiscated license plate numbers of motor vehicles because of violations by the registered owners shall be tagged and alarmed under the LTO management information system so that the owners will be compelled to settle their fines and penalties before the removal of the alarm and for the owner to be allowed to renew the vehicle’s registration.

The LTO-CAR regional director emphasized that the roll out of the LTO management information system is part of the ongoing reforms being introduced by the agency leading towards the implementation of the no-contact policy in the apprehension of violators of land transportation and traffic laws, rules and regulations ensure the safe travel of motorists on all roads in the country. By Dexter A. See

This post has already been read 1017 times!Firstly, it is fervently wished Talk N Text’s Jeth Troy Rosario gets to