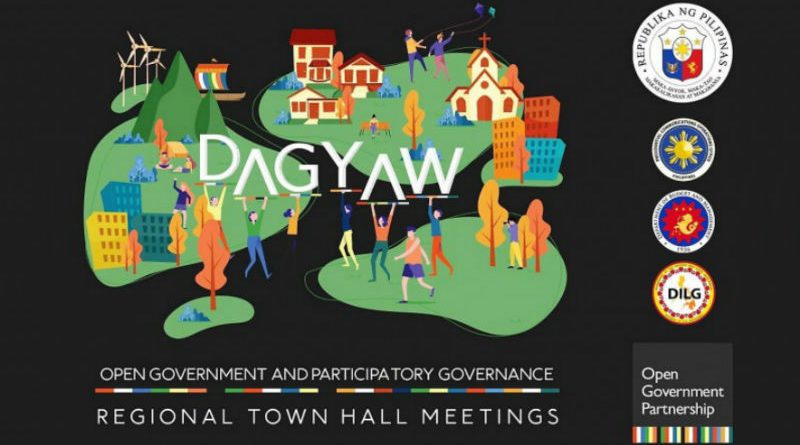 Presidential Communications Operations Officer (PCOO) Assistant Secretary Ana Marie Paz Rafael pointed out the ‘Dagyaw’ is a forum for Filipinos in the different parts of the archipelago to directly interface with senior officials of government agencies through the Open Government and Participatory Governance regional town hall meetings which is now underway nationwide.

The series of regional dialogues dubbed “Dagyaw’ is aimed at providing a venue for productive, valuable, sincere and visible engagement between the government and the people at the grassroots level.

The Department of Budget and Management (DBM) and the Department of the Interior and Local government (DILG), with the support from the PCOO and non-government partners, are mandated to bring the regional dialogues in 16 regions around the country where priority regional issues will be discussed among the participating sectors and the concerned government agency representatives.

‘Dagyaw’ is a Hiligaynon term for ‘bayanihan’ that exemplifies the concept of togetherness, the very nature and value proposition of the Participatory Governance Cabinet Cluster and the Open Government Partnership.

In the Baguio leg of the regional dialogue series, the issues evolved around environmental preservation and protection efforts of concerned government agencies and local governments, disaster risk reduction and management and tourism potentials of the different tourist spots around the region.

Rafael explained the regional town hall meetings also intends to communicate the good governance reforms of the administration of President Rodrigo R. Duterte such as the Tax Reform for Acceleration and Inclusion (TRAIN)law, the Build, Build, Build program, and the Ambisyon 2040, among others, all geared towards enhancing inclusive growth among Filipinos.

‘Dagyaw’ 2019 is also aimed at gathering stakeholder inputs for the co-creation of the Philippine Open Government Partnership National Action Plan 2019-2021.

The PCOO official underscored that the regional dialogues will be replicated in the provincial, city and municipal levels to foster greater citizen participation from the grassroots level for issues and concerns to be properly ventilated and eventually addressed by concerned government agency representatives who are tasked to respond to the queries of the people.

Last year, the same three agencies conducted a series of regional dialogues with the aim of providing a venue to disseminate information on the Open Government and Participatory Governance initiatives of the present administration where during the said regional fora, the clamor for town hall meeting to be done per region was expressed by stakeholders. By Dexter A. See