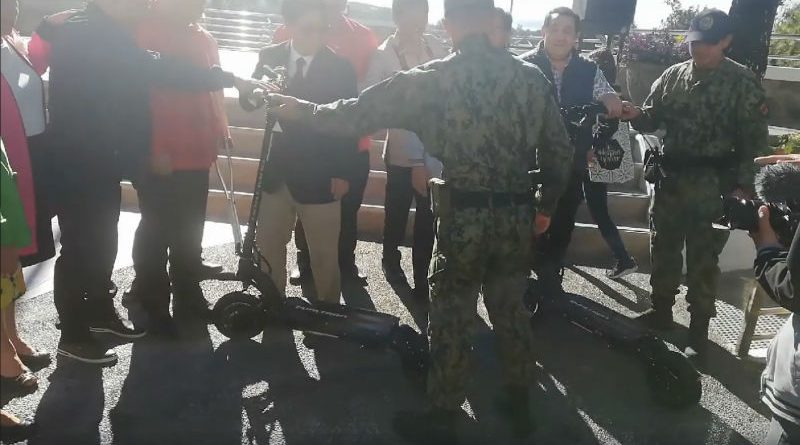 BAGUIO CITY – The city government received from an anonymous donor some ten environmentally-friendly scooters to be used by the personnel of the Baguio City Police Office (BCPO) in the implementation of their peacekeeping, anti-criminality, anti-terrorism and anti-insurgency campaign to help sustain the prevalence of decent peace and order situation in the city.

The 10 scooters was turned over to city officials by a certain Garry Vasquez who represented the supposed donor of the same.

Vasquez informed city officials the scooters are electric-powered and could even maneuver the city’s terrain up to an elevation of at least 30 degrees, thus, it will definitely be of help in providing convenient and better transportation for the law enforcers, and provide convenient travel from the police stations to the areas that need help from the city police force

He claimed the 10 scooters is just the initial batch delivered to the city while the remaining 10 scooters from the donor will be arriving soon depending on the availability of the same.

For the past several months, the city government had been receiving numerous donations from different individuals and corporations to help in improving the ability of the city to deliver basic services to the residents and visitors alike.

Vasquez said that the scooters when used by the members of the city police force will definitely improve the mobility of the police personnel, especially when responding to the needs of the residents and visitors when in times of trouble or when a crime is going on in certain area of the city.

The second batch of scooters will be delivered to the city government anytime as soon as the same will be available from the donor so that the same will be distributed to the different police units that need such kind of service.

Among the donations given to the city government by the different individuals and corporations include buses, coasters, trash bins and other units of equipment vital in the delivery of basic services to the people in the different parts of the city.

Various individuals and companies have signified to donate different units of equipment to the city government in the coming months wherein such equipment will be instrumental in facilitating the effective and efficient delivery of services to the people and improving the image of the city as one of the top tourist destinations in the country.

City officials expressed their gratitude to the individuals and corporations that gave donations in whatever for to the city over the past several months considering that such donations play a vital role in the effective and efficient delivery of services to the people in the different barangays of the city.