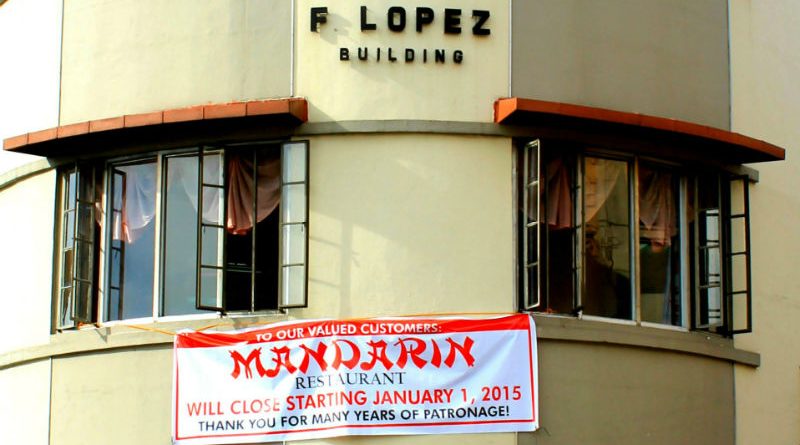 BAGUIO CITY  – The Summer Capital’s beloved Chinese restaurant, the Mandarin Restaurant along Session Road is folding up business by January 1 after 39 years of serving quality Chinese food in the city.

This as stiff competition of global food chains mushrooming along Session Road in recent years and the entry of malls nearby has siphoned off their loyal customers through the years, said owner Mark Perez, a third generation of pre-war Chinese families that migrated and set-up businesses in the city.

Together with his cousin and business partner, ace businessman Mike Del Rosario, who comprises GLP Corporation, Perez said they could no longer continue serving the famed crispy pancit canton, stuffed tofu and fried chicken as it has already become too costly to maintain the restaurant.

Just like Baguio’s iconic Star Café at Lower Session Road, he said there’s hardly anyone in his family particularly his children who now have their own work as professionals seem to be interested in running the affairs of the restaurant.

Baguio Mandarin Restaurant was established October 1975 by his father George Leung Perez and his partner Basilio Gochu (who eventually sold of his shares to Mike Del Rosario’s father Sonny) at the Fernando Lopez Building.

“The reason why the restaurant was established here is that we also used to own Timong Restaurant along Magsaysay Avenue just across the public market. Since wala ng tambayan ang clan naming, wala ng place to hangout, they decided to build the Mandarin restaurant.”

And the restaurant which has hosted almost every function may it be wedding receptions, baptisms and birthdays of Baguio’s old-time families  has been in the city catering quality Chinese food to Baguio residents.

Back then, he said, business was really good with the restaurant hiring some 16 staff, almost half of these staff staying with them for more than 30 years.

But then came the malls along Session Road and global food chain brands that sprouted almost everywhere at Baguio’s Central Business District. This according to Perez is what made them decide to finally close down the business.

“We really felt it when they put up that chain of restaurants along Upper Session Road and we felt that we were also getting old and our kids no longer want to continue managing the restaurant. In fact, there are a lot of factors that we considered folding up,” he shares.

At first, he shares, they wanted to set-up something new by remarketing and changing the menu but then thinking that they will no longer have family managing the business, he said their family decided to no longer continue the stressful management of the restaurant which he said is also not earning enough as it used to.

“We are not getting younger and that our children already have their own lives, so continuing to this without somebody to takeover is a big risk,” he said.

Compared to his brother Geoffrey Perez, who owns nearby Chinese restaurant and bake shop Tea House, and has children to continue the business, he said his family of four could no longer sustain in handling the affairs of the restaurant. “The restaurant business is a very stressful business.”

He said they have been maintaining the restaurant because of their loyal employees and for being the family’s gathering place during the New Year and All Saints’ Day. He also has anther business, Photo Techniques, his hobby-turned business endeavor that has also been challenged by new competition.

“That was probably the time when I decided to talk to Mike and all family members and we decided to call it quits after 39 years,” he said.

“Of course there’s this heavy heart that we will be closing shop after several years when this has been my father’s legacy, but we can only hold on to it until we also feel that it has really come to an end,” he adds.

Perez, however, doubts rumors spreading that the restaurant will only be replaced by a popular food chain which his business partner Del Rosario owns.

“Why would he be putting up something here when he has his own building being put up at Session Road that will be the new site of Mc Donald’s? ” he adds.

The most difficult part of closing up shop, he shares, is leaving behind the friendship they have already established with their longtime employees. “Almost half of them, especially the kitchen staff, have been with us for more than 30 years, it is with a heavy heart that we will be parting with all of them.”

But then he said many of their loyal staff also saw it coming. He promised giving their loyal employees enough for them to get by after closing shop.

Elizabeth May Chan, their cashier since the early 1980s, said they accept what have happened to the restaurant in the past years. “God maybe has a different plan for us and we accept it wholeheartedly,” she said.

But for Perez, there’s a message he wants for the local government to hear.

He shares the sentiments of Baguio’s old-time businesses that have been a trademark of the Old Baguio that everyone loved, as they have all been bearing the entry of international and global brands along Session Road through the years.

He suggests for the city officials to at least here their plight of considering giving incentives to old-time businesses, instead of giving these incentives to bigtime international businesses wanting to open stores in Baguio and eventually defeating their smaller old-timer competition, as he claimed it is the local shops and restaurants that have been shaping Baguio’s business and food landscape since the turn of the century.

“Baguio will not be Baguio without us the original businesses in the city. At least the only way they, the city officials, can help us is to ease our burden by offering us incentives not to close shop rather than giving these incentives to multinational and global brands that are coming into the city slowly eating up our small businesses,” he finally shared.